The Syrian Army has said that it has eliminated the terrorists who recently attacked civilian and military buses in Deir ez-Zor writes SANA. 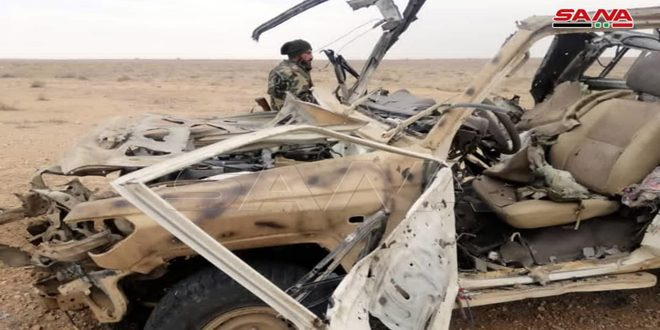 Syrian Arab Army units operating in Deir ez-Zor have killed eight terrorists that attacked public transport a few days ago in Kabajib area in Deir ez-Zor’s countryside and destroyed two of their vehicles, which are equipped with heavy machine guns.

A military source, in a statement to SANA, said, “After wide and precise combing and tracking operations, units of our brave armed forces were able to eliminate a terrorist group, which has recently attacked buses used by civilians and army personnel on the Deir ez-Zor- Palmyra highway, in the area of al-Shula and Kabajib, and two pickup vehicles equipped with heavy machine guns were destroyed and eight terrorists were killed.”

The source added, “our armed forces continue to hunt the remnants of the terrorist group in the area after securing the Deir ez-Zor – Palmyra international highway for the buses and citizens.”

On Tuesday evening, army units eliminated one of the terrorist groups, which in recent days attacked several vehicles used by civilians and army personnel on the Deir ez-Zor- Palmyra highway, martyring and injurying of a number of them.

Those attacks came in synchronization with identical media reports that talked about the transporting hundreds of Islamic State terrorists by the US occupation forces from Iraq to the al-Tanf area to launch attacks against Syrian army personnel and citizens in the Syrian al-Badia.