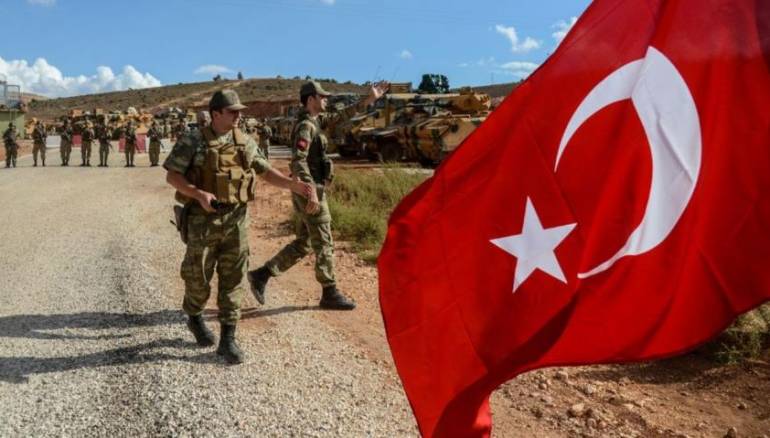 Two Syrians have been charged in Germany for alleged links to a terrorist organization on suspicion they were involved in the killing of an army officer in their homeland in 2012, prosecutors said Monday, Asharq Al-Awsat reported.  Khedr A.K. was charged with membership in a terrorist organization while Sami A.S. was charged with supporting a terrorist organization on allegations they were acting on behalf of the Nusra Front, as al-Qaeda´s affiliate in Syria was known at the time of the alleged offenses. Neither of their last names was given in line with German privacy laws. The two were arrested last summer in Naumburg, in eastern Germany, and in the western city of Essen.  The pair are suspected of taking part in the killing of a captured lieutenant colonel of the Syrian government forces in July 2012, prosecutors said. They said that Khedr A.K. guarded the man as he was brought to the execution site. Sami A.S. is suspected of filming the officer´s shooting and preparing the footage for use as propaganda.

A small Islamist militant group has claimed responsibility for an attack on Turkish forces in the northwestern Syrian province of Idleb VOA reported.  The Ansar Abu Bakr al-Siddiq Squadron said it was behind the attack Saturday that targeted a Turkish military outpost in the northern countryside of Idleb. “The sniper platoon of the Abu Bakr al-Siddiq Squadron targeted one of the main bases of the ‘Turkish NATO’ military stationed near the town of Batbo, north of Idleb,” the extremist group said Sunday in a statement published on social media. Since its founding in August 2020, Ansar Abu Bakr al-Siddiq has claimed responsibility for at least three other attacks on Turkish forces in Idleb.

10 Russia-backed fighters were killed when ISIS landmines exploded in al-Tayba area in al-Sukhna, in Syria’s eastern Homs countryside near the administrative border with the Deir Ezzor province, Asharq Al-Awsat reported. Meanwhile, Russian warplanes carried out on Sunday 40 airstrikes targeting ISIS positions in Aleppo, Hama and Raqqa. The Russia-backed forces launched a security campaign in the deserts of Deir Ezzor and Homs, where forces from the al-Quds Brigade, 5th Corps and National Defense militias continue to comb the area from Kabajib and al-Shoula to al-Sukhna, in an attempt to secure the Deir Ezzor-Homs road.

Syria has said it would import more crude oil to cover fuel shortages it blames on Western sanctions that disrupted regular Iranian oil shipments that had for years compensated for the country’s loss of domestic oil production as a result of conflict, Reuters reported.  Prime Minister Hussein Arnous did not specify how Syria would secure extra supplies but said they had already imported 1.2 million tonnes of Iranian crude oil that cost along with petroleum products in the last six months around $820 million. “We have become dependant on imported oil and we have used up foreign currency in large amounts to pay for petroleum products,” Arnous told deputies in a speech to Parliament.