Bahaa al-Halabi has been shot twice by unknown gunman in al-Bab, just weeks after another media activists was assassinated writes Alsouria Net. 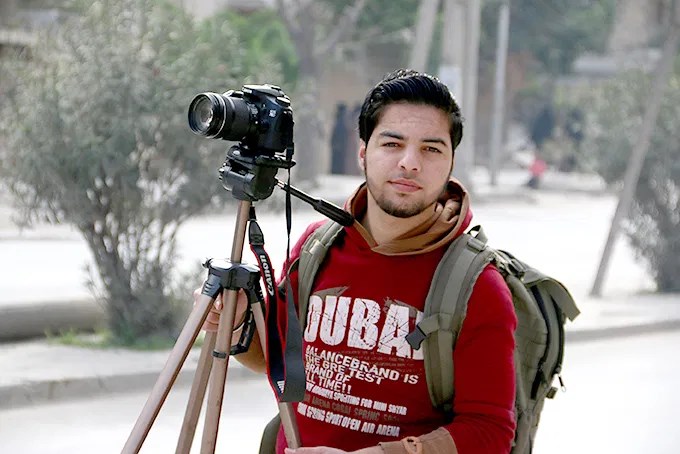 Media activist Bahaa al-Halabi was shot and wounded in an assassination attempt in the city of al-Bab in the eastern countryside of Aleppo, three weeks after the assassination of press reporter Hussein Khattab in the same city.

According to Alsouria Net’s reporter, Halabi was shot at by unknown gunmen near al-Corniche Street in al-Bab city, which led to his injury.

The information indicated that Halabi was hit once the chest and once in the arm, confirming that he is being treated at the hospital in the city, noting that his condition is stable at the time of writing.

No party has claimed responsibility for the attack yet.

The assassination attempt angered activists due to the large number of security incidents in the Aleppo countryside in general, and al-Bab city in particular.

Halabi, who hails from al-Bab, has worked in previous years as a correspondent and war photographer, covering battles in the eastern neighborhoods in Aleppo between the factions and Assad’s forces.

Halabi was injured several times while on the job. He was also subjected to a previous arrest attempt by Hay’at Tahrir al-Sham in 2017. He is currently working as a reporter for Syria TV.

The incident comes three weeks after the assassination of media activist, Hussein Khattab, by unknown assailants while he was preparing a report in al-Bab.

Khattab was considered one of the most prominent media activists in the countryside of Aleppo. He was originally from the city of al-Sefira and was a key member of its media office for years, and had recently worked as a media contributor with Turkish channel TRT.

The assassinations are part of a state of security chaos in the northern countryside of Aleppo, which is under the control of the National Army factions.

Since the start of the peaceful movement in Syria, Syrian journalists and activists have been facing numerous violations, including murder, assassination, detention and forced disappearance, while the perpetrators continue to enjoy impunity.