A Russian group has distributed food to needy people in Damascus, particularly the families of martyrs or those wounded in the war writes SANA. 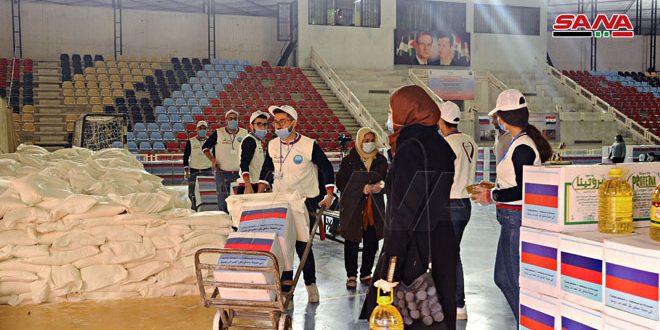 The Russian-Syrian Business Council, with the participation of the Russian Association for Development of Friendly Relations with Syria, on Thursday distributed food baskets to about a thousand families affected by terrorism in Damascus province at Tishreen Sport Hall.

The event, held under the title ‘To Damascus City … From Russia With Love’, is part of a series of humanitarian activities that have included several provinces and started in the Salamyieh area in the Hama countryside, then Hama, Homs, Tartous, Lattakia and Aleppo, to include also Damascus countryside and Suweida, the head of the council, Dr. Louai Youssef, said in a statement to SANA.

Youssef pointed out that 55 tons of various foodstuffs have been distributed to families affected by the war in Damascus, especially for martyrs’ families, and for those who have been wounded in the war, and the displaced and needy families.

For his part, Basil Maihoub, a member of the Executive Office of Health and Social Affairs Sector in Damascus, indicated that the provided assistance reduces the burdens caused by the terrorist war and it expresses the Russian people’s solidarity with the Syrians in light of the difficult conditions they suffer as a result of the economic siege and the unilateral coercive economic measures imposed on the Syrian people by a number of western countries.