Following the death of Walid al-Muallem, there are a small handful of people that could step into the position and become the new Foreign Minister writes Nedaa Syria. 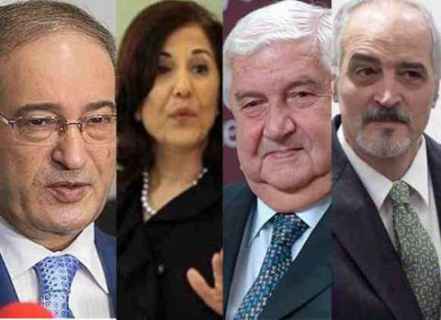 The position of Foreign Affairs Minister of the Syrian regime has become vacant after the death of Walid al-Muallem was announced at dawn on Monday. At a time when Bashar al-Assad has not named the person who would succeed him, Nedaa Syria has considered the most prominent candidates for the position.

Faisal Mikdad is considered the first contender to fill the position. He has served as Muallem’s deputy since his appointment in 2006, after has filled numerous positions, most notably the regime’s Ambassador to the United Nations and the Security Council. Russia calling him Muallem’s “reliable partner” boosts his chances of taking on the task.

The regime’s Ambassador to the United Nations, Bashar al-Jaafari, is the second candidate in line after Mikdad, due to his long history of diplomatic work and the several positions he has filled in the Ministry of Foreign Affairs and a number of the regime’s embassies around the world. However, his proximity to Iran more than Russia may stand between him and the position.

Next in line is Ayman Sousan, who has held the position of Assistant Foreign and Expatriates Minister of the Syrian regime since 2014. Prior to that, he was the regime’s Ambassador to the European Union and Belgium. He has repeatedly appeared in the media, especially in Western outlets, in the past few years, and the Assad regime assigned him to speak in its name during the Sochi conference, which was organized by Russia in 2016. He is known as “Muallem’s student.”

It is possible that Bouthaina Shaaban, the private translator of Hafez al-Assad and political and media adviser to Bashar al-Assad, who is affiliated with Iran, might compete to take over the Ministry of Foreign Affairs, due to her proximity to the former head of the regime and her presence in the meetings that Hafez al-Assad held with American officials between 1991 and 1994.

On Sunday, head of the Syrian regime, Bashar al-Assad, issued a decision to appoint journalist, Luna al-Shibl, to the position of special adviser, which had been occupied by Bouthaina Shaaban for years, without clarifying the fate of the latter. The step by Assad begs further questions as to whether Assad was preparing to give Shaaban the position of Minister of Foreign Affairs instead of Muallem, who exhibited signs of poor health during the refugee conference.