In a call with President Putin, Assad has said that he hopes the upcoming refugee conference will be a success and that most refugees want to return writes SANA. 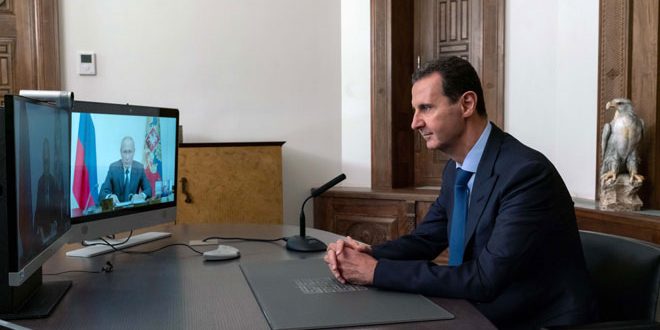 President Bashar al-Assad affirmed that the International Conference on Refugees’ Return, scheduled to be held in Damascus, is just the start of a solution to this humanitarian issue, indicating that the majority of refugees are willing to return to Syria.

Assad, during talks with Russian President Vladimir Putin via video, noted that the majority of refugees are willing to return to Syria after the state created the appropriate conditions, and it is hoped that the Refugees’ Return Conference will come up with significant results.

“I am happy that this video conference happened, particularly before the upcoming refugee conference.. and I thank you for your interest in this issue. The issue of refugees is a humanitarian issue for us and you and for a lot of countries, but for us, it is a national cause,” Assad said.

“As you know, the majority of refugees were those who have escaped terrorism, the killing and fear.. Others left because of the destruction of infrastructure, so life in cities, villages or neighborhoods became impossible,” Assad affirmed.

Assad went on to say, “each house in Syria is interested in the issue of refugees, and this issue is a priority for us as a government in the coming period, especially after the liberation of a large part of the Syrian territories, and after the battlefield has receded despite the continuation of terrorism.”

Assad indicated that the biggest obstacle facing the return of refugees is the Western siege imposed on Syria, on the state and the people, and thus for the return of the refugees the basic needs necessary for their livelihood must be secured.

Putin, for his part, said that the scale of the humanitarian catastrophe in Syria is still significant, adding that Russia supports the convening of the international conference on the refugees and it is doing its best to make the conference a success.

He added that Russia will continue efforts to encourage a political solution to the crisis in Syria and preserve the sovereignty and territorial integrity of the country.