Husam Eddin Ala has said that the issue of the return of displaced Syrians must not be tied to political agendas reports The Syria Times. 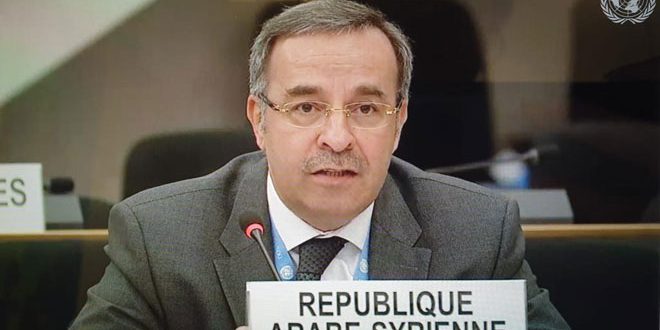 Syria has reiterated that the takfiri terrorist war and the economic terrorism war represented by the unilateral coercive measures against it are the main reasons behind the humanitarian suffering and the displacement of Syrians.

In a statement at the Executive Committee of the United Nations High Commissioner for Refugees in Geneva (UNHCR), Syria’s Permanent Representative to the UN, Husam Eddin Ala, said, “The takfiri terrorist war and the economic terrorist war, represented by unilateral coercive measures, constitute the main reasons for the humanitarian suffering and coercive displacement of Syrians,” Ala added.

He reaffirmed the call to support the efforts of the Syrian government in responding to the humanitarian situation in Syria and to facilitate the return of the displaced, away from the political conditionality that donor countries seek to impose on the work of international humanitarian agencies.

Ala stressed the importance of respecting the principles laid down in the relevant United Nations resolutions.

Ala indicated that the Syrian government, despite the economic blockade, keeps working to return normal life and rehabilitate the infrastructure along with restoring service institutions to areas liberated from terrorism by the Syrian Arab Army.

Ala criticized the obstacles put by some countries and agencies to hinder those efforts in the service of political agendas that have caused the humanitarian suffering of Syrians, and seek to politicize the humanitarian response through conferences being held in the absence of the Syrian state.

Ala, at the conclusion of his statement, thanked the High Commissioner for Refugees and urged him to play a more active role in supporting the efforts of the Syrian government to facilitate the voluntary return of displaced Syrians to their homeland and to contribute to overcoming obstacles to achieving this goal. He asked for more financial resources and for the countries concerned to lift unilateral coercive measures, and distance the issue of the return of refugees from conditionality and political agendas.