Egypt's Foreign Minister has highlighted the need for a political solution in Syria and the need for the independence of its national decision making to be retain writes SANA. 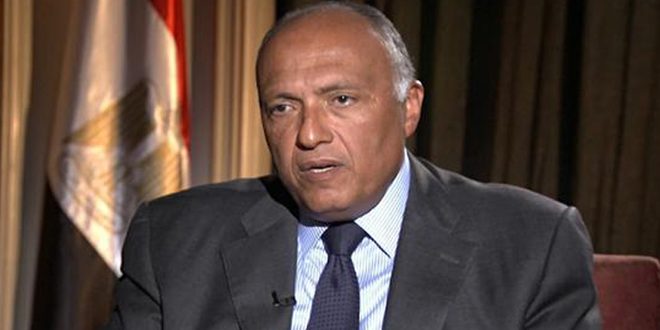 Egyptian Foreign Minister Sameh Shoukry reaffirmed the necessity of reaching a political solution to the crisis in Syria and confronting terrorist organizations and their backers.

The Egyptian website Al-Youm Al-Sabea, quoted the Egyptian Foreign Ministry’s Spokesman, Ahmad Hafez, as saying that Shoukry, in phone call with UN Special Envoy for Syria Geir Pedersen, stressed Egypt’s support for finding a solution to the crisis in Syria in a way that preserves its unity and the independence of its national decision making.

Shoukry also reiterated Egypt’s emphasis on the necessity of decisively confronting terrorist and extremist organizations and their regional supporters.

Pedersen, for his part, underlined the necessity of supporting the efforts that aim to push the political process forwards.