The Syrian National Coalition has met to discuss ongoing developments and the need for a political solution and a ceasefire across the country. 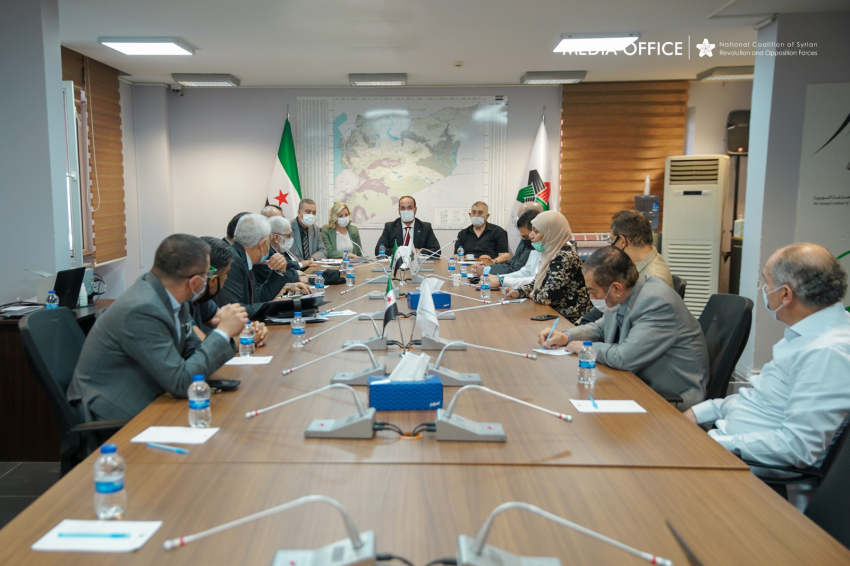 The attendees discussed the latest on the ground and political developments. They also reviewed the reports of the President, his deputies, the Secretary-General, the Syrian Interim Government, and the Assistance Coordination Unit.

The meeting began by paying tribute to the souls of the martyrs of the Syrian revolution and member of the National Coalition, Muhammad al-Nabhan, who passed away last month of the coronavirus, as well as Dr. Adnan al-Jasem, who died two days ago while performing his humanitarian duty fighting the virus in the liberated areas in the countryside of Aleppo.

Hariri talked about the work of the coalition during the past two months, and its ambitions to improve the living conditions of Syrians, strengthen communication with components of Syrian society, and emphasize partnership with Syrian political parties and efforts to reach a common political vision for a solution in Syria.

Hariri briefed the participants on the major political and international developments in Syria, chief among which is the unprecedented calm in the liberated areas of northern Syria. He stressed the need to preserve and strengthen the ceasefire agreement and develop it into a nationwide ceasefire.

Hariri considered the ceasefire to be one of the pillars that must be built on should a political solution be reached, in accordance with UN Security Council Resolution 2254.

He zoomed in on the crimes and violations of PYD militias in the eastern Euphrates region, noting that the National Coalition, through the al-Jazira and Euphrates Committee and the rest of the departments and institutions, is working on addressing all these crimes, expose them, and prevent them through a set of steps and procedures.

He stressed that despite the approaching one-year anniversary of the formation of the Syrian Constitutional Committee, the Assad regime continues to impede its progress.

Hariri talked about the development of the internal work of the National Coalition, especially the activation of the work of departments, offices, and committees.

He praised the work of the National Dialogue Committee, which has been holding meetings with various components of Syrian society with the aim of enhancing communication, cooperation and coordination, and reaching an inclusive national vision.