Following a meeting in Aleppo, the tribes and clans of Syria have expressed their rejection of foreign occupations and the theft of national resources writes SANA. 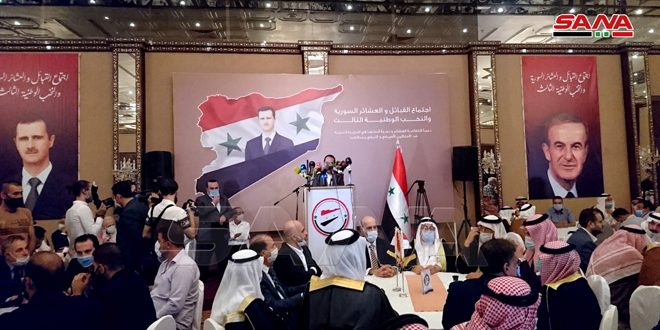 The final statement of the third meeting of Arab clans, tribes and national elites held Thursday in Aleppo stressed support for the popular resistance that was kicked off in the al-Jazeera region against the occupier, its mercenaries and tools.

Participants expressed their readiness to extend moral and material help to the popular resistance until the occupier and its tools are expelled from the Syrian territories.

They reiterated that “Damascus is the capital of all the Syrians and their compass”, hailing the victories achieved by the Syrian Arab Army in Aleppo, Idleb and other Syrian areas under the courageous leadership of President Bashar al-Assad.

They also expressed their rejection of any illegitimate foreign presence on the Syrian territories, adding that all natural and economic resources belong to the Syrian people alone and no-one has the right to tamper with them.

Meanwhile, locals in al-Jisr village in the al-Shadadi area, in Hassakeh’s southern countryside, took to the streets to protest against the illegitimate presence of the US occupation forces and the criminal practices of the Syrian Democratic Forces (SDF).

SANA’s reporter in Hassakeh indicated that the locals in al-Jisr demonstrated in rejection of the US occupation and to demand the expulsion of the SDF, calling for the expulsion of foreign forces that are illegitimately present in Syrian territories and put an end to the violations and the looting of Syrian resources.

Also in Hassakeh, for the eighth day in a row, the Turkish occupation and its terrorist mercenaries in the Ras-al-Ayn countryside have turned off the Alouk Water Station, cutting off drinking water to Hassakeh city, threatening a million people with thirst and letting them suffering from repercussions of the spread of coronavirus.

Speaking to SANA, the General Director of Hassakeh Water Establishment, Mahmoud Ukla, said that efforts to restart the Alouk Water Station have failed, adding that the suffering of the locals continues in light of the increased temperatures and demand for water, particularly since there is no alternative to the Alouk Water Station in sight.

In Raqqa, two civilians have been injured in a car bomb explosion in Slouk town in Raqqa’s northern countryside where Turkish occupation forces and their terrorist mercenaries are spread.