A new ship has been launched from Tartous Port, which is now capable of carrying thousands of heads of livestock and has produced many job opportunities writes SANA. 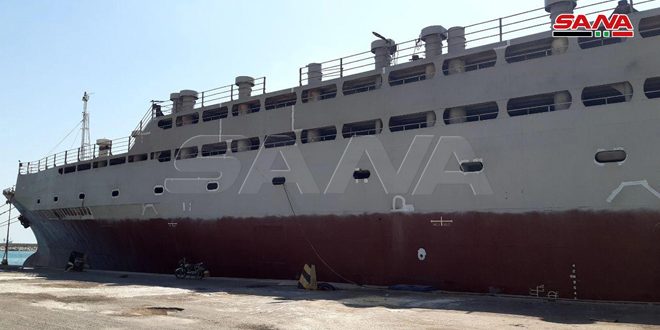 The ship the Atlantic Rose was launched from Tartous Port on its first cruise after the national cadres working in the maritime transport sector were able to convert it from a damaged reefer ship, into a large ship to transport livestock according to the best international specifications.

In a statement to SANA, Director of Tartous Port, Eng. Thaer Wannous said that the national technical and labor cadres succeed in converting a damaged reefer ship into a large ship to transport livestock within the basin of Tartous Port, through a continued work that lasted for 14 months, to become equipped according to the latest international standards and specifications for this type of ships.

Wannous pointed out that the total area of the ship is 5,000n square meters, while its length is 136 m, and its width is 19 m, and it could accommodate about 5,000 heads of cow or 25,000 sheep heads, it also consists of six floors, and each floor is divided into several hangars, pointing to the existence of automatic feeding and drinking machines with ventilation holes.

In turn, Captain Abdullah Sabra considered that the most important characteristic of this work is its achievement by national cadres and experts, affirming that this step encourages everyone who has a ship out of service to invest it in what contributes in assisting the transport maritime sector and creating for new job opportunities for the youth.

Wael Khadaraj, owner of one of the workshops working in the maintenance and construction of ships, which participated in the ship transformation operation, stressed that national experts are able to design ships that compete with international ships in terms of equipment and specifications

Khadaraj added that transforming the Atlantic Rose conveys a message that in spite of the war circumstances and the siege, we are working with all our energy to leave a Syrian imprint in the field of shipbuilding, according to the global standards.