As the coronavirus spreads, regional leaders and international representatives have gathered to discusses tackling the virus and protecting vulnerable citizens writes Shaam Network. 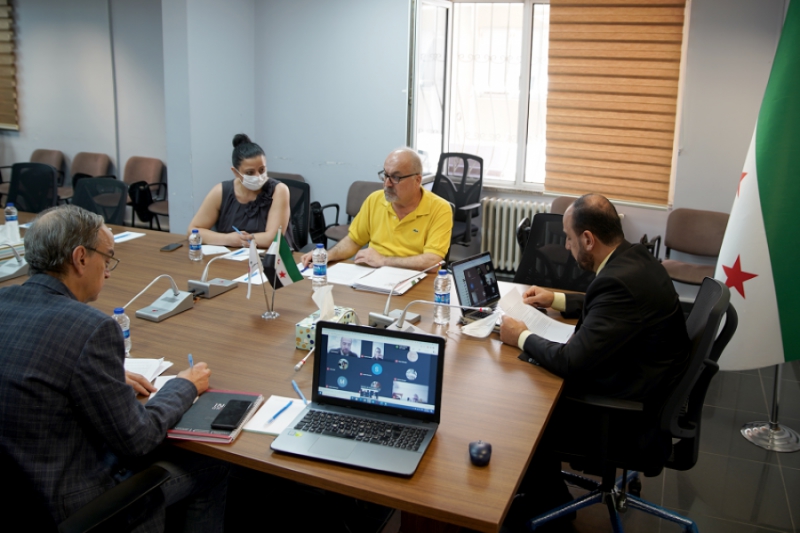 In attendance were coordinators, members of the coalition, co-head of the Syrian Constitutional Committee, Hadi al-Bahra, in addition to the Minister of Health of the Syrian Interim Government, Dr. Maram al-Sheikh, the Director General of the Coordination Unit, Muhammad Hassnu, and the coordinator of the Early Warning Alert and Response Network, Dr. Nasser al-Mahawesh.

Representatives of the United States of America, the European Union, the United Kingdom, Germany, France, and Belgium participated in the meeting.

The latter focused on the health situation in Syria, and effective steps to combat the coronavirus after several outbreaks in liberated areas were discussed, in addition to following up on the implementation of the agreed plan between the Ministry of the Health, Health Cluster and the World Health Organization (WHO) to tackle the virus.

The Minister of Health gave a briefing on the health situation in the liberated areas and pointed out that tests are being conducted for high-risk cases and those who interacted with them. The minister clarified that the number of those infected with the coronavirus reached 22 as of Thursday evening.

He added that there is strong coordination between the Ministry of Health and the health directorates in all regions. He also said that two quarantine centers have been equipped, the first at the Bab al-Hawa crossing, the other in the city of al-Bab.

He stressed that there is great concern due to the increase in the number of infections, especially since the region has little to no capabilities to accommodate the growing cases in the region. He demanded the provision of health equipment and face masks free of charge, as well as the provision of food and drinking water.

The President of the National Coalition, Dr. Nasr al-Hariri, also attended a part of the meeting. He thanked all countries for their continuous support of the Syrian people and their cause, especially the humanitarian and medical assistance and the response plan to fight and contain the coronavirus. He spoke about the precarious situation in the liberated areas, especially with regards to health facilities, and the high population density — particularly in the camps. He also stressed the need to continue to support and strengthen the emergency response plan in coordination with WHO and the need to raise the level of support with regards to drinking water.

Hariri said that the only solution to deal with the crises afflicting the country — including the coronavirus crisis — lies in achieving a political transition, in accordance with Resolution 2254 and the Geneva Declaration, leading to a state of institutions that are capable of properly dealing with crises, and realizing the aspirations of the Syrian people in terms of freedom, dignity and democracy. He emphasized the need for accountability and the release of detainees, which he considered to be the cornerstone of transitional justice and sustainable peace in Syria.

The issue of detainees in Assad prisons was one of the most important items on the meeting’s agenda. The participants confirmed that the detainees are more vulnerable than others to the infection, due to the poor conditions in prisons. As for female detainees, they are exposed to brutal torture and overcrowding in prisons.

Participating countries demanded pressure on the regime to comply with international resolutions and to implement Special Envoy Pedersen’s call to immediately release detainees and allow international organizations access to prisons and detention centers.

The attendees reviewed the latest developments in the field, especially the start of the military formations in the Syrian National Army and the withdrawal from the cities to the Rabat areas near the frontlines. At the political level, the attendees discussed the preparations for the Constitutional Committee’s third session, which was called by Pedersen.

For their part, ambassadors and country representatives affirmed their continuous support for the rights of the Syrian people, their permanent commitment to providing humanitarian and medical assistance to those in need in the camps, their support for the political process, and the efforts of Pedersen to make the work of the Constitutional Committee successful in order to reach a political solution in accordance with Resolution 2254.