Trucks laden with fruits and vegetables are being exported to neighbouring and Gulf countries, but truck drivers are complaining about the dues they are being forced to pay writes SY 24. 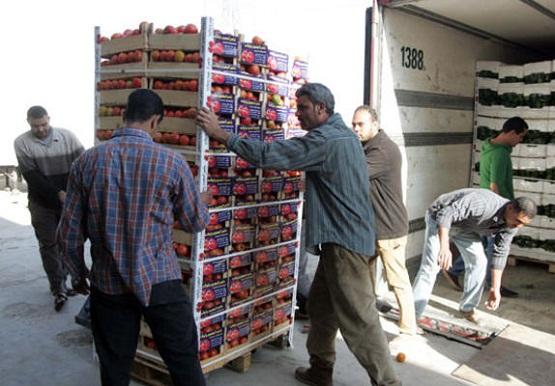 The Daraa Governorate started exporting vegetables to neighboring countries and the Gulf through the Nassib Border Crossing, where, last Saturday, 29 trucks crossed over into those countries.

Engineer Hassan al-Samadi, head of the Plant Protection Department in Daraa, who supervises the agricultural center, indicated that the process of monitoring the export of agricultural consignments is carried out thoroughly at the Nassib Border Crossing, where last Saturday, 29 trucks loaded with agricultural goods made their way to the Gulf states after they were examined. Those goods were considered production surplus.

Regarding the issue of the fees imposed by the neighboring countries on Syrian trucks, which are estimated at 400 dollars, Samadi stressed that the matter is being looked into. Moreover, according to Samadi, a number of Syrian trucks loaded with vegetables had to return without delivering the goods due to said fees, which caused traders to incur extra costs, and load other trucks, with Gulf-registered plates, carrying dates, as those are duty free.

Merchants and truck owners called for a solution to this problem and the exemption of Syrian trucks from the imposed fees and the facilitation of the movement of trucks and the export of Syrian vegetables, which are of good quality and sold at an appropriate price.