Following a failed drone attack against the Hemeimeem Airbase, Russia and the Syrian army have retaliated, striking a number of different points in Lattakia and Idleb writes Al-Masdar. 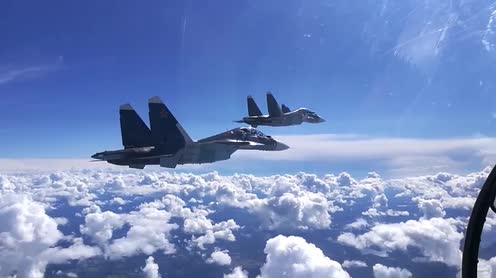 The Russian and Syrian forces launched airstrikes and attacks against jihadi forces in both provinces of Lattakia and Idleb.

The Russian Air Force issued its response to the attempted militant drone strikes on the Hemeimeem Airbase over the weekend, with their warplanes hammering the jihadist rebel positions in the Jabal al-Akrad and Jisr al-Shughour regions.

According to a field report from Lattakia Governorate, the Russian warplanes carried out several airstrikes over the jihadist stronghold of Kabani, resulting in the destruction of bases and trenches.

The report said the Russian Air Force then carried out several airstrikes along the Lattakia-Idleb axis, with the primary target being the jihadists of the Turkistan Islamic Party and the al-Qaeda-linked Hurras al-Deen group.

At the same time, Russian warplanes were seen flying over the Jabal al-Zawiya region of southern Idleb.

These reconnaissance flights were likely giving the Syrian Arab Army coordinates of the jihadist rebels in Jabal al-Zawiya, as the latter later launched several artillery and missile strikes against the militants there.

According to reports from southern Idleb, the Syrian army targeted the jihadist forces between the Jabal al-Zawiya, the al-Ghaab Plain, and Jabal al-Akrad regions, with the primary focus of the strikes on the positions of the Turkistan Islamic Party and Hay’at Tahrir al-Sham.

The wide-scale attack by the Syrian Arab Army comes in retaliation for the attempted jihadist drone strikes on the Hemeimeem Airbase on Saturday evening.

Over the weekend, the jihadist rebels attempted to bomb the largest Russian airbase in Syria, Hemeimeem, which prompted Tuesday’s large-scale assault.

It should be pointed out that the jihadist drone strikes on the Hemeimeem Airbase were unsuccessful, and were foiled by the joint air defenses of the Russian and Syrian armed forces.

The Russian Reconciliation Center confirmed the attack on the Hemeimeem Airbase during a press briefing on Sunday.