Over the course of the Syrian Civil War, 86,000 children have had limbs amputated, and forced to spend hundreds of dollars on prosthetics writes Asharq Al-Awsat. 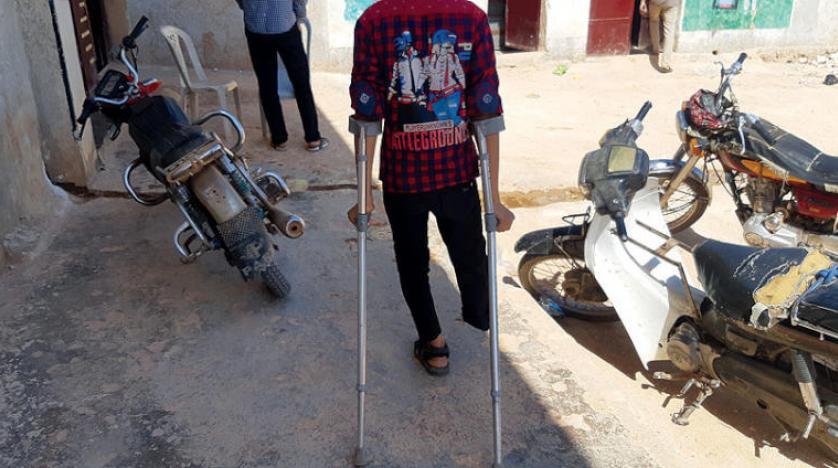 With more areas in Syria being swept by the war and thousands having been killed and wounded, especially in the northwest, children have been effected most after being deprived of their basic right to move.

Khalid al-Hussein, a 12-year-old boy, told Asharq Al-Awsat, “I was injured during a raid while going to the market with my father. My father was killed while I was severely injured and lost my foot.”

“I could not see a thing then; the smoke and dust was all that I could see at that moment. Then I found myself on a hospital bed with an amputated foot. I tried to move it a lot but couldn’t; all that I could do was cry”.

Khalid sells ice cream on the street to secure food until he receives artificial limbs.

The number of children who have lost their lives in Syria between March 2011 and March 2020 has reached 29,257 according to figures published by the Syrian Network for Human Rights, while the World Health Organization and Handicap International have documented around three million injuries during the war, including one million children, of whom, 86,000 have been amputated.

“All of my friends are playing, except for me”, says Khouloud al-Hamdan, 9, summarizing her suffering. Khouloud is one of the victims whose lives were destroyed by the raids carried out by the regime and Russia after a missile hit her house, leaving her with serious injuries.

“I wish I could play alongside my siblings and friends, but I cannot because of my injury. My dream is to have new feet so that I could move however I want”.

Dr. Mohammad al-Koli, a specialist in prosthetics, says, “We are working on producing the components [of a prosthetic] in one of our factories and are purchasing ready-made parts that cannot be produced locally from abroad. We then examine the injured child, taking measurements of their injuries.”

Al-Koli adds, “We receive all amputees who are referred to us with a prescription from the liberated areas. The cost of one prosthetic is around 700 dollars, an acceptable price when compared to the costs of imported and smart prosthetics”.