As the value of the Syrian pound continues to fall, families are worried that they will soon no-longer be able to afford food for their families reports Asharq Al-Awsat. 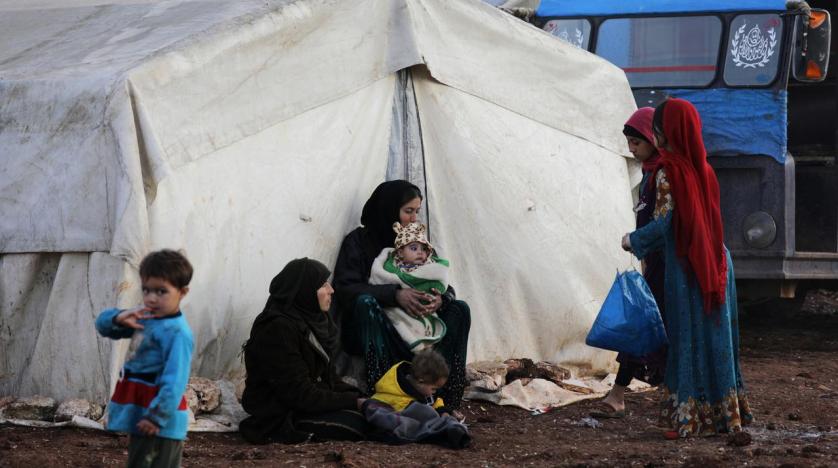 Umm Ahmed and her family have survived years of war, but now the mother of five is terrified uncontrolled devaluation of the Syrian pound will prevent her from feeding her children.

“Since the war started, we’ve tasted all sorts of suffering,” said the 39-year-old, displaced three times by fighting in the opposition stronghold of Idlib.

“I think hunger will be among the next.”

The value of the Syrian pound has plummeted with dizzying speed in recent days on the informal market, sending prices skyrocketing, shuttering shops, and sparking unprecedented protests.

Umm Ahmed said she was so alarmed she was considering buying flour in bulk to start hoarding supplies.

In Idlib, the increase in the price of bread has sparked protests against Hayat Tahrir al-Sham militants in charge of the region of three million people — around half displaced by the conflict and many dependent on aid.

Some shops have closed, an AFP correspondent reported.

In recent days the value of the Syrian pound on the black market has started to tumble even faster from one record to the next.

From Saturday to Monday alone, the exchange rate soared from 2,300 to more than 3,000 pounds to the dollar, more than four times the official rate of around 700. It hovered close to 3,000 on Wednesday.

Before the conflict, it stood at 47.

Analysts say the recent spike is likely due to worries ahead of the introduction of new US sanctions from June 15, and the sudden fall from grace of tycoon and cousin of the president, Rami Makhlouf, which has set other top businessmen on edge.

Prices have risen across the country, though the Turkish lira is used in some parts of the opposition-held north.

The government has blamed the unofficial devaluation on US sanctions, and “manipulation” of the exchange rate.

But the rapid deterioration has sparked unprecedented criticism in regime-held areas, including in the southern city of Sweida, where dozens have demonstrated for three days since Sunday, boldly chanting against the president.

In the capital Damascus, one lawmaker said Sunday that part of the blame for the unofficial devaluation lay with the “wrong policies practiced by the government”.

Another demanded action from the central bank, which increased the official exchange rate from 434 to 700 in March, but has since maintained that peg.