A painting unveiled by Iranian Supreme Leader Ali Khamenei has shed light on how Assad is viewed in Iran and his importance to their “Axis of Resistance” writes Baladi News. 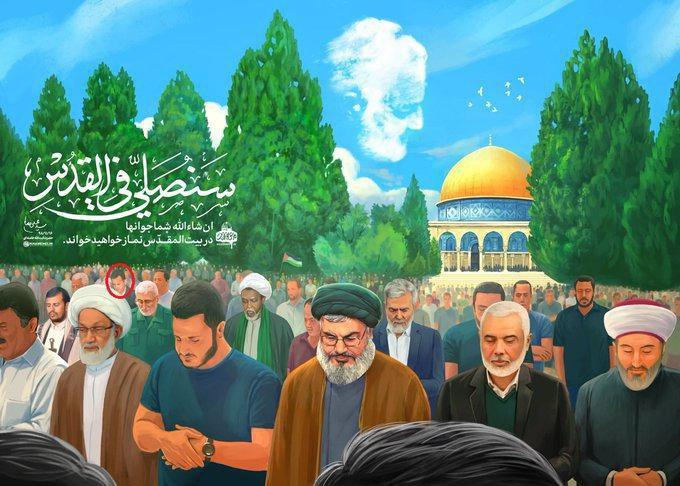 A painting published by Iranian Supreme Leader Ali Khamenei’s website drew sarcasm on social media for its depiction of members of the so-called “Axis of Resistance” praying at al-Aqsa mosque in Jerusalem. Bashar al-Assad relegated to the back of the picture while Tehran’s allies in Iraq were absent and Hezbollah leader Hassan Nasrallah was shown towards the front.

The painting, titled “We Will Pray in Jerusalem,” showed Nasrallah in the center, at the al-Aqsa Mosque compound. Standing to his left was the head of Hamas’ political office, Ismael Haniyya, next to the latest Grand Mufti of Jerusalem Sheikh Muhammad Ahmad Hussein. Behind him was Islamic Jihad leader Ziad al-Nakhaleh. Standing to Nasrallah’s right was Bahraini Shiite religious figure Issa Qassem.

What spurred sarcasm among Syrian activists on social media was Bashar al-Assad’s placement among those depicted in the painting. Assad was portrayed in the third row, alone, without any Iranian leaders beside him, indicating the importance of his role in Iran’s project in the Arab world.

Absent from the painting were Iran’s allies in Iraq, especially the leadership of the Popular Mobilization Forces headed by Abu Mahdi al-Muhandas, who was killed alongside former Quds Force commander Qassem Soleimani in a US strike near the Baghdad airport early this year, despite Soleimani’s appearance in the painting as a cloud near the top of the mosque.

Iran intervenes in the region through those pictured in the painting, while Tehran faces major criticism for its role in supporting militias parallel to state authority in Arab countries in particular.