The First Response Team have uncovered 100 bodies in mass grave in Raqqa, that is believed to contain the victims of the Islamic State reports Zaman Al-Wasl. 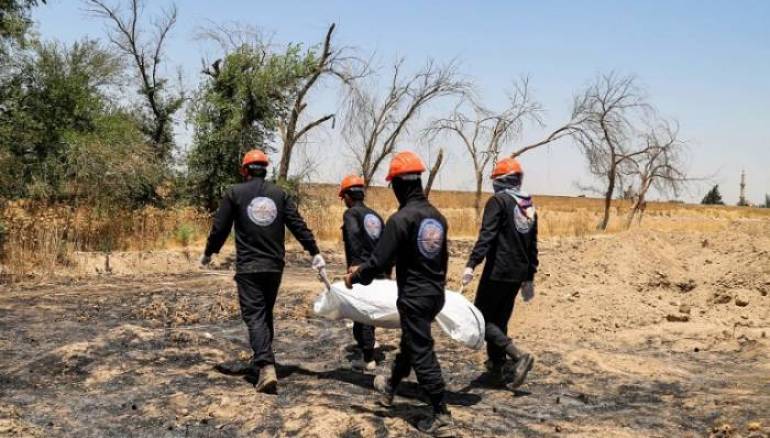 About 100 bodies have been exhumed from a mass graves in eastern Raqqa province, the First Response Team said Tuesday.

Yaser al-Khamis, head of the local rescue group, said the corpse toll of the new mass grave in Tel Zaidan is expected to reach 200.

The exhuming of the grave began on Apr. 13, 2020, and most of victims are young men, according to the forensic crew.

Since the defeat of the Islamic State (ISIS) in Raqqa in 2017, forensic teams have begun to lift bodies that are believed to have been buried there during the four-month campaign to liberate the city.

So far, 5,600 bodies have been exhumed from mass graves in the areas of the al-Rasheed Stadium, the zoo, the Bedouin neighborhood, and the ancient mosque.

In 2014, regime forces found a mass grave near Tabqa air base, containing the bodies of 60 troops killed by ISIS in 2014.

Activists said the victims in the mass graves were not only killed by ISIS, but also by the US-led International Coalition airstrikes and the YPG-led Syrian Democratic Forces (SDF).

The SDF has been the main partner of the US-led coalition against ISIS in Syria, helping drive the jihadists out of swathes of northern and eastern Syria.

ISIS has been largely defeated in the country but has continued to carry out ambushes, assassinations and bombings and still poses a threat along its border with Iraq.