Work is underway by stonemasons and builders to restore the famed features of the Umayyad Mosque in Aleppo, after its destruction by terrorists reports SANA. 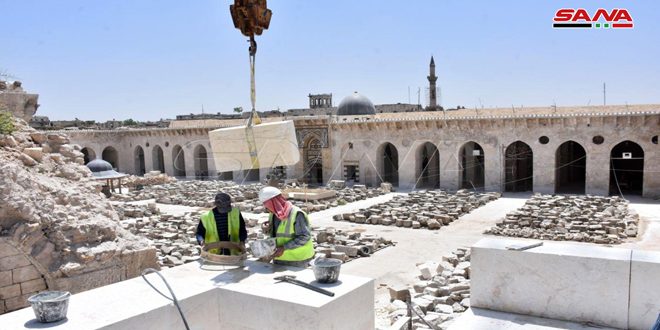 With great attention to detail and deliberate and calculated steps, the restoration work at the Umayyad Mosque in Aleppo is underway, with the goal of restoring every stone of this iconic ancient cultural edifice that had been damaged by terrorism.

This edifice, since its construction, had remained steadfast and survived the most severe earthquakes that hit the city, until it was destroyed by Takfiri terrorists.

A team of experts are hard at work to recreate the damaged stonework which features carved Islamic patterns and Quran verses, replicating the original carvings that date back 1,300 years ago.

Carpenters are also working to inlay and decorate wooden doors and arches, which will be installed soon, while other workers are busy rebuilding the minaret which was blown up by terrorists using explosives, and the workers have already made progress in uncovering and rebuilding the original foundations all the way up to the winding stairs.

The restoration of the facades of the mosque’s courtyards is almost complete, and the interior work is also almost finished as walls and pillars have been repaired along with ventilation, electricity, and lighting systems.

In addition, repairs to the shrine of Zachariah have been completed, while work has started to renovate the eastern part of the mosque, which is interlinked with the antique souqs (marketplaces).

The mosque, built during the 8th century, underwent comprehensive restoration and repairs starting in 1999 and concluding in 2006.