Idleb artist Adnan Kardash was killed when he smoked a cigarette before Iftar, in an incident that involved grenades and medium weapons reports Al-Modon. 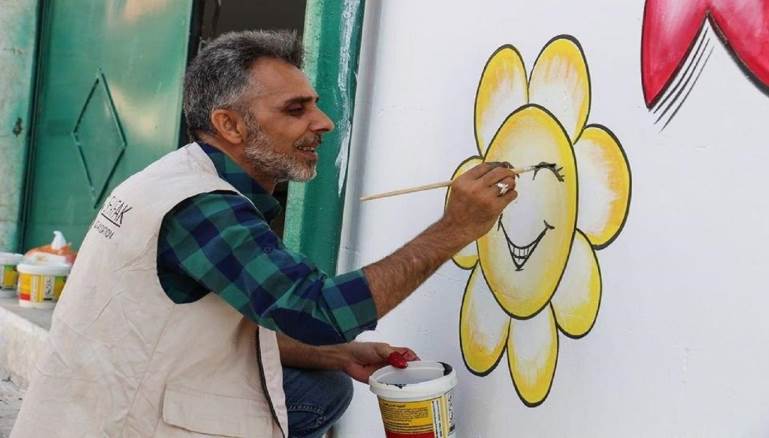 Idleb-born artist Adnan Kadrash, who used his drawings and paintings to revolt against the Syrian regime, was killed Monday evening during armed clashes involving grenades and medium weapons, resulting in deaths and injuries in the al-Naour neighborhood of Idleb city—all because he smoked a cigarette in public before Iftar.

Kadrash graduated from the Teacher Training Institute in 1999, after which he taught art at preparatory and secondary schools in Idleb. He also worked in the Visual Arts Center for seven years. When the Syrian revolution started, Kadrash worked with a group of other activists in Idleb to draw paintings held up by demonstrators demanding an end to repression.

He painted murals in the streets of Idleb paying homage to detainees, and referencing the injustice suffered by civilians across Syria.

Throughout his painting career, Kadrash sought to fill a so-called “artistic void” that prevailed in Idleb governorate throughout years of war, driven by his refusal to stop making art despite the fighting.

He worked in child protection, organizing artistic activities to help teach children in the camps. He also had the idea to form a society of artists and intellectuals in Idleb, with the goal of “filling the city’s cultural void,” as he put it.

In September 2018, Kadrash opened the Dhiaa Cultural Foundation, which included intellectuals, visual artists, poets and experts in cinema and theater. The goal, Kadrash said, was to show the world that Idleb is a city of art, poetry and intellect, and “not a city of terrorists,” as some media had reported.