An explosion has rocked a market in Afrin, killing at least 30 people who were gathering hours before the start of Iftar writes Enab Baladi. 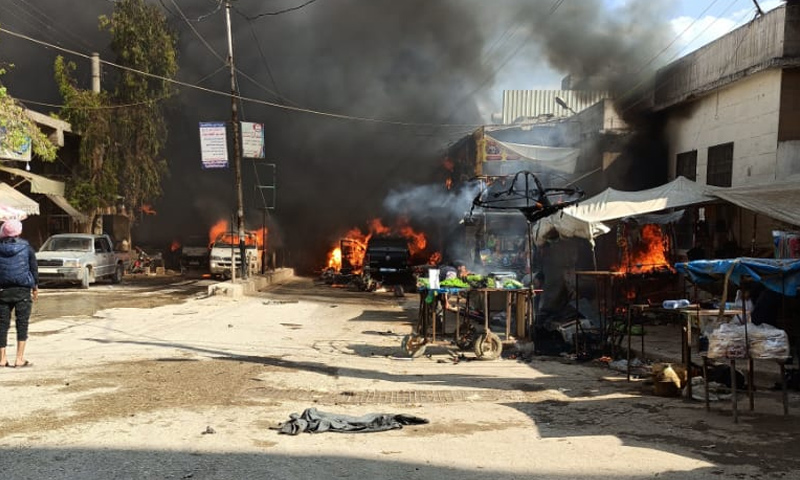 The death toll from an explosion that hit the city of Afrin in rural Aleppo has risen to more than 30 people, with dozens wounded, in what the Civil Defense in Aleppo is calling a “horrific massacre.”

A correspondent for Enab Baladi in rural Aleppo reported that a fuel tank exploded between Diwar al-Siyasiyah Street and Diwar al-Siraya at the entrance of the local market, which usually sees crowds of people in the hours before Iftar during Ramadan.

Ibrahim Abu al-Laith, director of the media office for the Civil Defense in Aleppo, said that the number of people killed had risen to more than 30, while the number of injured remains unclear but is expected to rise in the hours to come.

Activists shared videos on social media showing the strength of the explosion, with burnt bodies visible. Enab Baladi apologizes for not publishing the videos.

Hospitals have asked residents to come donate blood, according to the correspondent.

No party had claimed responsibility for the explosion by time of publication, while military police responsible for securing the area have yet to release a statement clarifying the details.

The city of Afrin has been witnessing frequent explosions from unknown attackers. Yesterday, an explosive device in a car exploded on the Ternada road in rural Afrin, causing material damage.

The past month has also seen repeated car and motorcycle bomb attacks in the cities of rural northern and eastern Aleppo, hitting local markets. Military figures have also been the targets of assassinations in the region.

In a previous interview with Yousef Hamoud, the spokesperson for the National Army, he said that most of the explosions were IEDs, and were considered to be carried out “by local agents.”

While the YPG have claimed responsibility for some of the explosions, they accuse the National Army and ISIS for explosions in areas under their control.