Syrian authorities have uncovered a cache of weapons and equipment in the southern provinces of Daraa and Suweida, mostly western manufactured writes SANA. 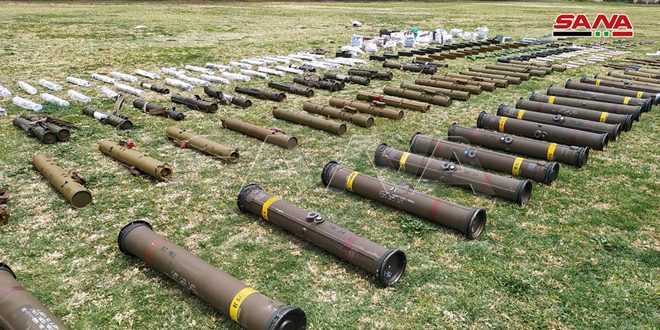 Weapons and ammunition, some of which are US-made, have been seized by the authorities from headquarters abandoned by terrorists in the countryside of Daraa and Suweida.

A source told SANA’s reporter that the authorities, in cooperation with the people, on Tuesday found weapons and ammunition, including TOW missiles, shoulder-held missiles, anti-armor missiles, light and medium machine guns, automatic rifles of western origin and RPG launchers with their projectiles.

A reconnaissance plane, advanced surveillance cameras, communication devices, in addition to large quantities of munition were also among the seized weapons.

On Monday, Malutka anti-tank missile, RPGs, rifles, Western and American-made submachine guns, hand grenades, satellite broadcasting, telecommunications devices, medicines and medical equipment in addition to a number of stolen cars were found in the countryside of Damascus and Quneitra.