Residents of the Syrian coast are anticipating, what could be, a devastating earthquake, but officials are confident that buildings can withstand writes Al-Watan. 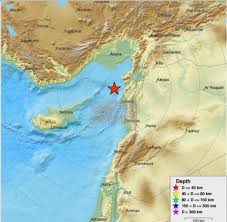 Residents of Tartous are anxious about news of repeated earthquakes, as COVID-19 falls to second place on their list of concerns. If it is not possible to know when the next earthquake will come, it is still vital to know the extent of preparations, if at least to keep damage to a minimum.

According to Hassan Hassan, Director of Technical Affairs in the Tartous City Council, the system for certifying buildings in Tartous and all of Syria imposes strict adherence to earthquake codes when licensing and reviewing all buildings and facilities.

He added that engineers and specialists conduct a number of studies about the type of building to be constructed. Those studies are audited by consultant engineers and validated by a branch of the Engineers Syndicate, then followed up by a supervising engineer who conducts workshops and organizes regular reports, in addition to carrying out the necessary tests on the concrete and other building materials. The goal is to ensure that the construction meets the conditions of the study and adheres to all safety requirements.

Hassan clarified that the design and construction of buildings in Syria is studied in accordance with the Syrian Arab Code for reinforced concrete released by the Syrian Engineers Syndicate in 1995, when a number of design requirements were published for buildings to resist earthquakes. The code also calls for authorities to map out seismic areas in Syria. Since then, structural designers have been obligated to take into account the impact of earthquakes on their buildings.

He added that since then, a number of additions were made to the code, including requirements for making buildings earthquake-resistant, internationally recognized ways to calculate and analyze structures, and an updated seismic map.