Russian and Syrian reinforcements have arrived in Ayn Eissa, as tensions between the regime and Turkey continue to rise reports Smart News. 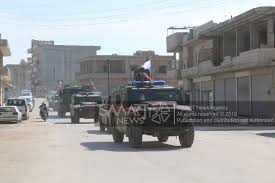 On Wednesday, Russian and Syrian regime military reinforcements reached the regime military base in Ayn Eissa, 48 kilometers north of the city of Raqqa, in northeastern Syria.

A joint military convoy of Russian military police and regime forces on Wednesday headed from the Tabqa military airbase to Brigade 93 near the city of Ayn Eisa.

The source, who asked not to be named, said that the convoy included six Russian military police vehicles, as well as regime troop transporters, accompanied by two Russian helicopters, without any Syrian Democratic Forces (SDF) presence.

Russian military reinforcements and the SDF had previously reached the town of Ayn Eissa on Feb. 7, 2020, after artillery fire by the Turkish army and Syrian National Army group, part of the Interim Government.

Russian forces have deployed in Raqqa in accordance with a deal with Turkey that stipulated that the SDF withdraw from the “safe zone” and that there be joint patrols between the two countries alongside regime forces deploying there.

This came after Turkey started a military operation against the SDF on Wednesday, Oct. 9, 2019, during which it took control over the two cities of Tel Abyad and Ras al-Ayn, as well as dozens of villages in Hassakeh and Raqqa provinces.