Syrian banknotes are still finding their way into opposition held areas, despite the closed borders and the security concerns writes Iqtissad. 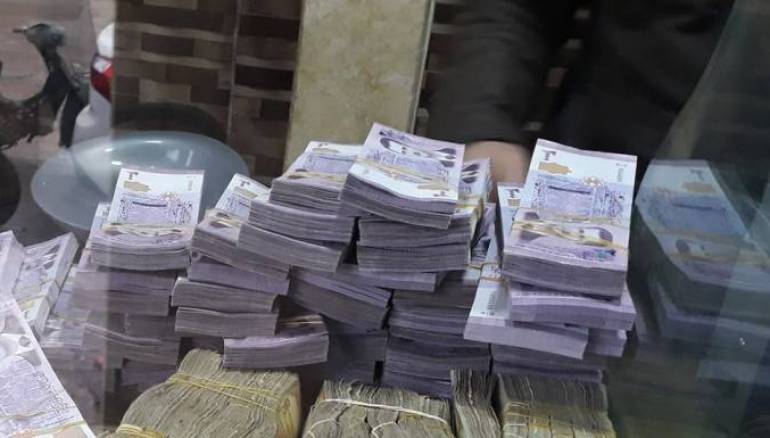 From where is the Syrian currency entering the opposition-held northwestern areas, specifically the newly issued 2,000 Syrian pound banknote, and how did it invade the markets so quickly?

These questions have dominated the Syrian north in recent weeks, especially with the region’s crossings being closed.

Despite the absence of clear answers, the Iqtissad business news site had used multiple sources to reach a conclusion concerning the matter. A well-infomed source said the currency is being smuggled into opposition areas via the Syria-Turkey border crossings.

Large amounts of the Syrian currency are often shipped in trucks loaded with goods.

The entry of the currency through crossings is not prohibited, “But only in small amounts. So large sums are being smuggled by the currency traders, hidden among other goods,”  he added.

According to the source, these large amounts arrive by sea to the city of Mersin, often via ships from Lebanese ports.

A second source has confirmed the information, saying that some regime smuggling networks are securing their transportation to Turkey. These networks sell the currency to traders in Turkey, at a cheaper rate than in the regime’s exchange market.

“However, another portion enters from land crossings that link the north to regime areas, illegally and through limited smuggling operations.”

The Syrian pound started 2019 at around 500 Syrian pounds to the dollar, but started to spiral downwards in the autumn and in recent weeks has crashed below 1,000 pounds, according to the Financial Times.

Joseph Daher, a Syrian-Swiss economist told the Financial Times that the pound’s decline highlights the vulnerability of Syrian markets to shocks, notably the worsening banking crisis and dollar shortage in neighbouring Lebanon, which has disrupted Syrian imports, strangled remittances from Syrian refugees and sparked panic in Syrian foreign exchange markets.

In early 2016, the International Monetary Fund estimated that Syria had 1 billion dollars in foreign currency holdings, while the World Bank estimated them to be as low as 700 million dollars, down from 20 billion in 2010.

By the beginning of 2019, the pound had reached 535 pounds to the dollar, sliding to 663 pounds in October, as Lebanon tightened its foreign transfers and cracks in the Lebanese financial system started to show.

On Oct, 17, 2019, protests broke out in Lebanon, leading the banks to shut their doors for two weeks, subsequently imposing unofficial capital controls and limiting withdrawals of US dollars.