The chairperson of the Syrian Democratic Council has expressed her willingness to enter into negotiations with the regime to discuss the Self-Administration areas writes Asharq Al-Awsat. 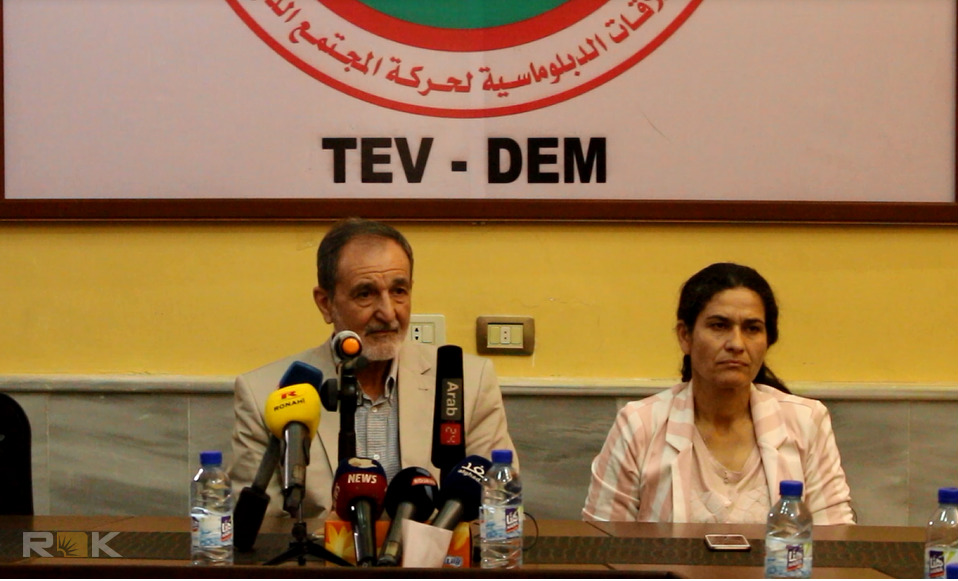 Ilham Ahmed, the chairperson of the executive body of the Syrian Democratic Council (SDC), said that Damascus has agreed, through Russian mediation, to start political negotiations, and the possibility of forming a “high committee” tasked with discussing the laws on local administration in Syria and the administrative structure of the “Self-Administration” of northeastern Syria.

Ahmed said in an interview with Asharq Al-Awsat that meetings had been held with a Russian delegate at the Hemeimeem base, and that, “the Russian delegate was commissioned by the Russian Foreign Ministry after meetings were held with all parties in northeastern Syria, including leaders of Kurdish parties and Arab and Christian figures, at the end of last year. Therefore, our meeting last week was a continuation of the first meeting. ”

In response to a question, she said that the Hemeimeem meetings were lengthy and, “included a set of questions in the first session, the most prominent of which was how to develop dialogue, and whether or not we are part of this dialogue or not, and within which framework these dialogues would be completed.” She added: “We are still discussing the first stages of the process of discussions with the Syrian government. Transferring the dialogue to serious discussions requires setting an agenda and an action plan to discuss its details through specialized committees.”

Ahmed indicated that the Russians are, “serious about playing the role of mediator and guarantor of the political process, and launching talks with the government, and pledged to pressure it to accept a comprehensive settlement, and promised to translate these promises into action in the coming days.” She added: “After discussions ended in Hemeimeem, we traveled to Damascus the next day, and met with Major General Ali Mamlouk (head of the National Security Office), and had a meeting in the presence of the Russian envoy.”

She said: “I am waiting for these words to be converted into actions, which will be accomplished by practical steps, and the launch of a comprehensive dialogue to determine the fate of the Syrian people and an area which is part of the Syrian state, while addressing urgent national issues, and dealing with them in a spirit of responsibility, and not in the spirit of hostility or betting on a military solution. From time to time we hear the language of threat and intimidation from senior Syrian officials and that if we do not accept dialogue, they will come with weapons. I say that these thorny issues must be addressed through dialogue, keeping the region away from the spectre of war, and protecting children who have suffered from the actions of terrorist organizations such as the Islamic State, the al-Nusra Front and the pro-Turkish factions.”

In response to a question, Ahmed said: “We are always ready for negotiations, whether in Geneva or directly with the government, and so we have worked on a draft constitution, and other specialized committees, and we have a clear vision for the solution. Dialogue can take place around issues that are simple and easy in order to open the way towards resolving complex issues—but the issue of the rights of nationalities remains above constitutionalism, and will remain on the table continuously, in all places.” She added that the location of the dialogue is not important. “What matters is that there is a settlement that satisfies the Syrian people, and meets the aspirations for the desired change.”

She noted that the meeting with the Syrian government did not address the issue of natural resources, and, “of course it is an issue that has a major role in influencing the negotiating process, and we believe it is necessary to hold back on it now until we reach a political map for the solution in Syria as a whole.” She said that the topic of the Syrian Democratic Forces is “a military issue, discussed by the leaders and military officials from the forces.” In the event of that a comprehensive agreement is reached, these forces will be part of the defense and protection of the state. But as for defining its role and areas of deployment and the form of its involvement, it is too early to go into details until we hear the government side and its perception on these issues.