As the regime advances in Idleb, Turkey has sent reinforcements to the city of Saraqib, on the intersection of the M4 and M5 international highways reports Enab Baladi. 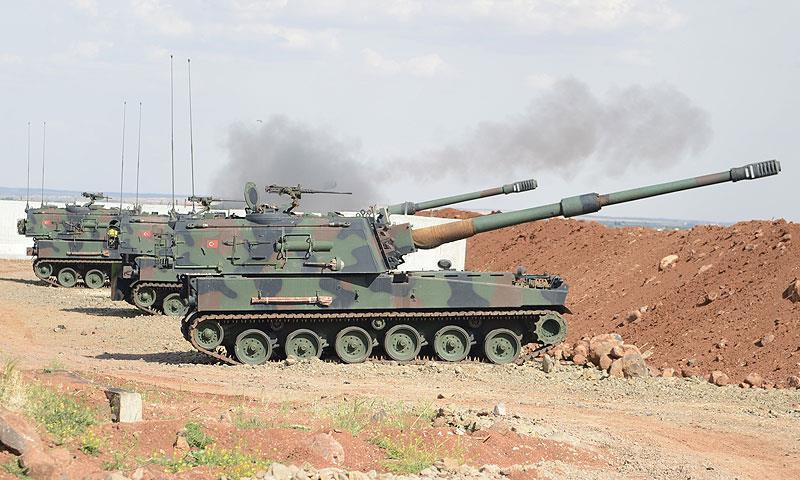 North, west, east and south, the Turkish army has deployed in the city of Saraqib in the southern Idleb countryside, sending a message to its Russian partner—the guarantor and major player in the Astana agreements overseeing the “de-escalation” zones which Turkish President Recep Tayyip Erdogan two days earlier describe as “dead.”

The city of Saraqib is distinguished by the intersection of the M4 and M5 international highways, as well as having had major protests against the Syrian regime, which gave it importance in the hearts and minds of regime opponents. Its removal from opposition control would constitute a new setback.

All of this has pushed the regime to place the city in its sights in recent years, and it is currently launching a massive military campaign against it, as it did with the two other cities of Khan Sheikhoun and Maarat al-Nu’man on the M5 highway.

This prompted the Turkish army to close all crossings with the regime and to surround the city of Saraqib on four sides.

The arrival of the regime there means a possible clash with the Turkish army, which sent—unusually—combat teams and dozens of armored vehicles, crowding the Idleb and Aleppo countrysides, according Enab Baladi, quoting eyewitnesses.

No Russian-Turkish diplomatic moves have yet taken place to clarify what is happening on the ground. The course of events indicate that the two countries’ mobilizations in terms of Syria and Idleb were cut off since the last communication brining together the chiefs of staff of the two countries—the Turkish, Yasar Guler, with his Russian counterpart, Valery Gerasimov, on Jan. 30, 2020, according to the Turkish Anadolu Agency.

Nothing has resulted from their talks apart from diplomatic statements regarding keeping open communication channels regarding Idleb and the de-escalation agreement there, giving the impression that there was no glimmer of hope for the regime and Russia to cease military operations in the province, which has claimed the lives of dozens of civilians and displaced thousands of people, according to data from Civil Defense teams.

Today, the Turkish president demanded that Russia not put obstacles in the way of Turkish operations in Idleb, reinforcing the suspicions that there a real dispute exists between Russia and Turkey, who are partners in trying to reach a solution in Syria, according to statements of the leaders of the two countries.

The narrow scope of the opposition’s control in Idleb and Aleppo has revealed the real solution both Ankara and Moscow are seeking—the latter has said more than once that the regime must regain every inch of Syrian territory for it to start the political solution.

Meanwhile, Ankara continues to insist that the head of the Syrian regime, Bashar al-Assad, has killed thousands and should not participate in the solution.