The Foreign and Expatriates Ministry has warned the UN that terrorist, with Turkish support, are planning to stage a chemical attack to provoke a Western response writes SANA. 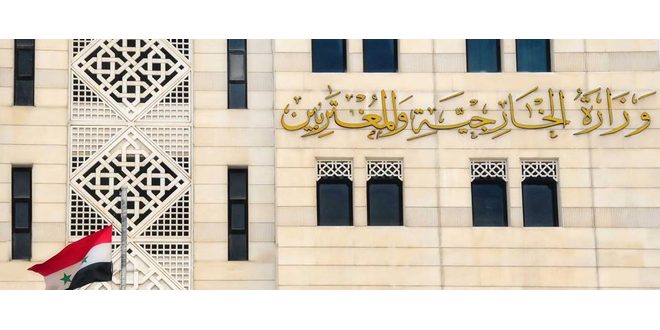 Syria affirmed that terrorist groups are currently working with Turkish support to fabricate a fake chemical attack south of Aleppo and northeast of Idleb in order to frame the Syrian Arab Army and halt its operations in those areas.

In a letter sent to the UN Secretary-General and the head of the Security Council on Monday, the Foreign and Expatriates Ministry said that it has become known to everyone that whenever terrorist groups feel cornered, the White Helmets begins staging fake chemical attacks on the instructions of their masters in Western states, in order to accuse the Syrian government of using chemical weapons and create a pretext for a military attack on Syria led by Washington and its allies.

The ministry said that Syria stresses that what the Syrian Arab Army along with its allies, are currently doing in the south of Aleppo and southeast of Idleb is part of its sovereign and constitutional right to defend its people and land as per international law, the UN Charter, and Security Council resolutions on counter-terrorism.

The ministry stressed that the goal of the current military operations in the south of Aleppo and southeast of Idleb is to end the suffering of civilians in Idleb and Aleppo.

The ministry went on to state that the Syrian government affirms that terrorists are currently working with Turkish support to fabricate a fake chemical attack south of Aleppo and northeast of Idleb in order to frame the Syrian Arab Army and halt its operations in those areas, which is the exact same thing that happens whenever the army makes advances in fighting terrorism.

The ministry said these tricks and fabrications have become worn out and no longer fool anyone, and they will fail to achieve the goals of terrorists and their supporters which is halting the military operations, asserting that these operations will continue until Syria is cleared of terrorists, reiterating that it has become known to everyone that the Syrian Arab Army has never used chemical weapons and does not possess any.

The ministry said Syria stresses the need for the countries of the world, particularly those that claim to care for international peace and security, to focus on dealing with the real threat to all countries, which is international terrorism and the use of toxic chemical materials by terrorists, stressing that the countries of the world should not provide cover for the terrorists’ crimes in Syria to serve personal agendas.

“The Syrian Arab Republic reiterates its stern condemnation of any use of chemical weapons by anyone, under any circumstances, and any place,” the ministry asserted.

The ministry concluded by demanding that the Security Council and UN Secretary-General denounce the terrorists’ crimes against Syrian civilians, including their use of chemical weapons, in addition to demanding they support the Syrian government in its war on terrorism.