A campaign by Deir Ezzor 24 is hoping to persuade people to stop using weapons indiscriminately and to consider the safety of others. 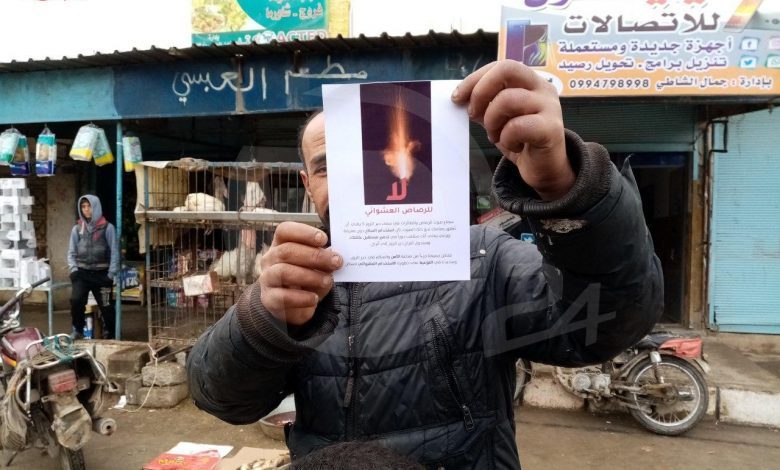 Deir Ezzor 24 network has carried out an awareness-raising campaign that targets the civilians and military personnel in Deir ez-Zor, under the title “No to Weapons”.

At first, the campaign was launched on Jul. 25, 2019, in the eastern Deir ez-Zor countryside (eastern Euphrates), such as in the cities of Ash-Shahil and al-Bussairah, and the areas of al-Shaitat and al-Suwar. It included several activities, such as the distribution of awareness leaflets, urging the people of Deir ez-Zor to stay away from the indiscriminate use of weapons. The campaign focused on the youth, who are the people using weapons indiscriminately most, especially at weddings and celebrations, and sometimes during conflicts or even fighting for personal motives.

The network also conducted meetings on the ground with many actors, tribal figures, and influential community figures, in addition to groups of young people, during which it explained the dangers of the indiscriminate use of weapons, discussed their use in the areas of Deir ez-Zor, and showed examples of many incidents that led to negative consequences, some of which claimed innocent human lives.

In its second phase, the “No to Weapons” campaign was carried out by Deir Ezzor 24 network into the countryside of Hassakeh governorate in al-Shaddadi city and Tel Hamis town, and in al-Suwar city in the northern Deir ez-Zor countryside for the second time. The campaign was received favorably by the people, as they have suffered a lot from the uncontrolled and indiscriminate use of weapons by civilians, who use them commonly at weddings, in fights and at parades, which have caused many tragedies among the people of these areas.

The administrations of the areas of Tel Hamis, al-Shaddadi and al-Suwar praised the campaign and called for its continuation, as it has a positive effect in facing this negative phenomenon.

It is indicated that the “No to Weapons” campaign is continuing and will reach other areas in the Deir ez-Zor countryside, and the provinces of Raqqa and Hassakeh, until it achieves its goals in reducing the disasters caused by the indiscriminate use of weapons.