Activists have launched a campaign on social media to highlight the plight of those living and experiencing the assault on Idleb by the regime and Russia reports Zaman Al Wasl. 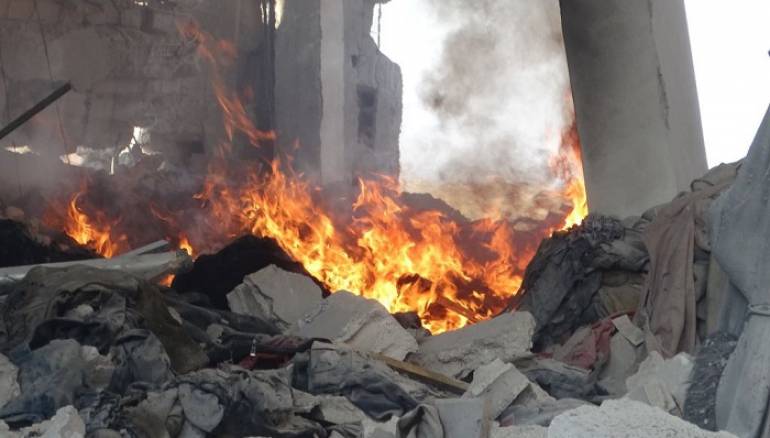 The #IdlibUnderFire campaign hopes to send a new alert to the international community about what is happening in northern Syria, activists say.

At least 150 people have been killed and 92,000 civilians have been displaced in northwestern Idleb province over the past two months, according to Syria’s Response Coordination Group.

Regime forces and their Russian allies have been targeting schools and medical centers, reportedly killing 10 medical staff since the offensive began, making it difficult for the local population to stay. The tactic has been used by regime troops elsewhere in Syria, AP reported.

Most of the displaced people are taking shelter in places neighboring the town of Reyhanlı, in Turkey’s southern border province of Hatay, as well as areas liberated from terrorists during Turkey’s anti-terror offensives, Operation Euphrates Shield and Operation Olive Branch, according to Hurriyet Daily News.

In September 2018, Turkey and Russia agreed to turn Idleb into a de-escalation zone where acts of aggression are expressly prohibited.

However, consistent violations by the Syrian regime and its allies have killed over 1,300 civilians since the start of the agreement.

Crucially, Iran-backed fighters, including members of Lebanon’s Hezbollah group whose participation has been key in previous battles, have not joined the fight for Idleb, deeming the region a low priority, unlike more strategic areas bordering Iraq and Lebanon. Even Russia hasn’t thrown all its weight into the fray and has continued to talk to Turkey about ways to reinstate the cease-fire.

Spearheading the offensive against Idleb and the northern parts of the central province of Hama is the government’s elite Tiger Force led by Brig. Gen. Suheil al-Hassan, a Russian-backed Syrian officer who took credit for some of the biggest government victories in the eight-year conflict.

But he has not succeeded in breaking Idleb’s defenses and remains deadlocked. According to opposition activists, elite forces from the Republican Guards and the Fourth Division led by Assad’s younger brother, Maher, have recently started taking part in the offensive.