Despite the reconciliations, dozens of people have been arrested by the regime's security services and have now ended up in the notorious Sednaya prison reports Zaman Al Wasl. 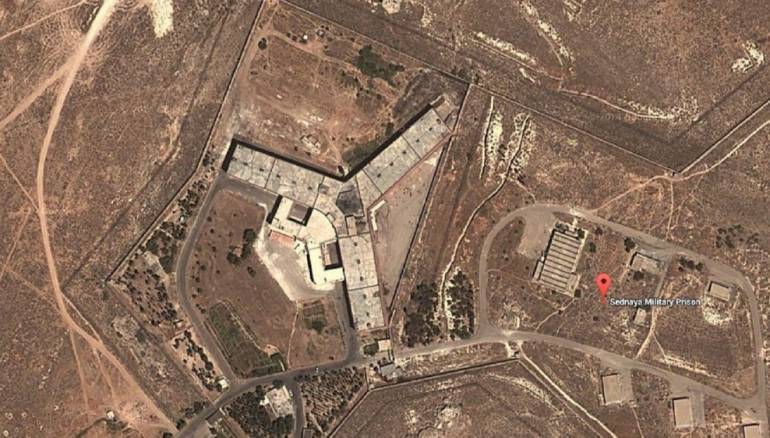 Over the past two weeks, the Syrian regime’s military intelligence moved dozens of the southern Damascus detainees to the nortotious Sednaya Military Prison on charges of terrorism.

A well-informed source said that most of the detainees transferred to Sednaya prison were previously held at the Palestine Branch, which is responsible for security in southern Damascus and for pursuing opposition-affiliated persons during its control of the area in 2012.

Most of those transferred to Sednaya were found guilty of affiliation with opposition armed groups, participating in battles against regime forces, and eliminating its informants within the region.

Several human rights reports have confirmed that Assad committed crimes against humanity in Sednaya prison with an Amnesty International report describing it as a “human slaughterhouse”.

Zia al-Sahar, Mohammad Ghazi and Mohammed al-Khabbaz have been transferred there, as well as detainees from the Qazmouz and Dawarah family, despite the reconciliation committees promising not to arrest or detain them after the departure of the Syrian resistance in April 2018.

The source said that the number of detainees from southern Damascus reached more than 120, in addition to the forcible recruitment of hundreds in the ranks of the regime’s army.

The regime’s intelligence services have carried out arrest campaigns targeting the towns of Yalda, Babbila and Beit Sahem, over the past few months, resulting in the detention of dozens on charges of terrorism and affiliation with rebel groups, and the arrest of many townspeople, despite the reconciliations and their enlistment in the ranks of the Fourth Division and the Tiger Forces.

Regime forces took control of southern Damascus’ towns in April 2018 after an agreement between the Syrian resistance and the Russians to withdraw their factions to the north with Russian guarantees.

According to the Syrian Network for Human Rights, at least 183 cases of arbitrary arrests were documented in October, including 109 cases of enforced disappearance.