During a visit by Mohsen Bilal, India affirmed its support for Syria and expressed its desire to take part in the reconstruction process writes SANA. 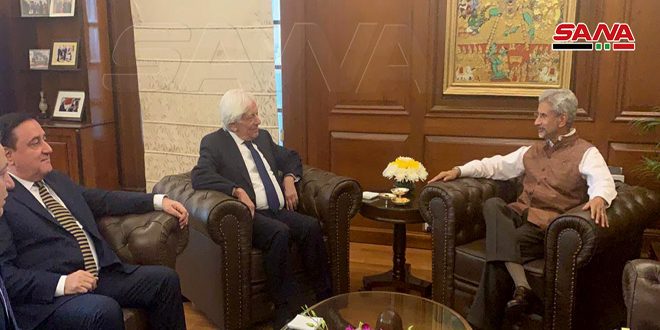 Indian Foreign Minister Subrahmanyam Jaishankar affirmed his country’s full support to Syria in its war against terrorism and its readiness to contribute to the reconstruction, underlining the necessity for a Syrian led political solution without any foreign interference.

Jaishankar, meeting a member of the Baath Party’s Regional Leadership, Mohsen Bilal, shed light on the distinguished and deep-rooted relations binding Syria and India, referring to the rapprochement in the viewpoints of the two countries on many issues.

The Indian Minister expressed his country’s readiness to support Syria and its people in the stage of reconstruction after putting the final touches on the memos of understanding and agreements, which will be signed by the two countries during the meetings of the Joint Syrian-Indian Committee scheduled to be held in March next year.

Bilal, for his part, talked of the terrorist war that Syria is facing and the outrageous Turkish interference in its internal affairs and the support provided by the Turkish Regime to terrorists in Idleb and in northeastern Syria.

He added that Syria, supported by its allies and the friendly states, has been able to eliminate terrorism from most of its territories.

He indicated that Syria welcomes the support of the friendly states such as India in the reconstruction process and in enhancing education and experiences and the continued training for Syrian people, expressing high appreciation for India standing by Syria in its war against terrorism.

Bilal also met India’s Vice President Venkaiah Naidu, who expressed how his country rejects any foreign interference in Syria’s affairs and its keenness on preserving Syria’s territorial integrity and its support to the political solution to the crisis.

Naidu underlined the necessity of continuing to fight terrorism until it is completely uprooted;  considering it to be an epidemic that affects all humanity, expressing hope for the return of security and stability to all the Syrian territories.

“Syria and India have been partners in spreading the ethics of tolerance and amity and they have never been enemies, and they have usually stood together in the face of the foreign interference in the affairs of other countries,” Naidu said.

Bilal, for his part, affirmed that Syria will triumph in its war against terrorism, and security and stability will be restored to every inch of its territories with the help of its allies and friendly states such as India, which will participate in the reconstruction in the country.

Earlier on Wednesday morning, Bilal arrived in the Indian capital city of New Delhi for a one-week visit, where he will meet a number of Indian officials and chairmen of Indian national parties.