SDF commander Mazloum Abadi has criticised Russia and the US for not doing enough to prevent Turkish attacks reports Enab Baladi. 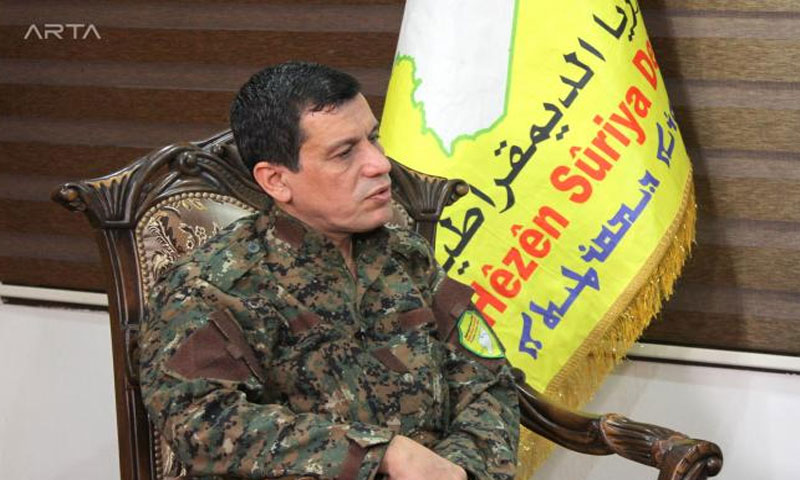 The commander of the Syrian Democratic Forces (SDF), Mazloum Abadi, called on the Syrian regime to officially recognize the SDF and the Self-Administration and its educational system, while criticizing Washington and Moscow for not putting pressure on Turkey with regards to the military operation in the area east of the Euphrates.

On Sunday, Abadi said in an interview with ARTA FM radio, that, “the current agreement between the SDF and Damascus includes government forces taking part in the defense of the area against the Turkish aggression and the armed groups backed by Ankara.”

He said that the Syrian regime “wants to impose its control over the area and to return the situation to how it was before 2011,” adding that it did not have the strength to carry this desire out.

Abadi rejected the principle of reconciliation which the regime has conducted with opposition groups in other Syrian cities over the past few years.

Return to the constitutional committee

Abadi called on the regime to recognize the constitutional rights of Kurds and Assyrians to pave the way for a final political resolution with “Russian assurances”, and said that there had been progress in the matter of representatives from northeastern Syria taking part in the constitutional committee.

Abadi said that the SDF rejected any agreement that did not take into account the constitutional rights of the Kurds, Arabs, Assyrians and other communities of the region.

Abadi also criticized the United States and Russia for not putting pressure on Turkey to force them to adhere to their commitments, in accordance with the deals completed with Washington and Moscow. He accused Turkey of, “carrying out a project of demographic change and preventing displaced people who had fled the Tel Abyad and Ras al-Ayn areas from returning to their homes.”

He said that, “American forces would deploy from al-Malakiyeh to Deir ez-Zor in eastern Syria, including Qamishli.”

America to defend oil wells and Russia the border

Abadi said that the mission of the American forces was limited to defending oil wells and pursuing the fight against the Islamic State and taking part in managing the matter of foreign Islamic State prisoners held by the SDF.

According to the SDF leader, Russian forces will deploy in Manbij and Ayn al-Arab and in areas east of Qamishli along the border, in joint military patrols with the Turkish army in the areas west of Qamishli.