US State Department’s Special Envoy for Syria has explained the objectives of the US in Syria and highlighted the need for a political solution writes Brocar Press. 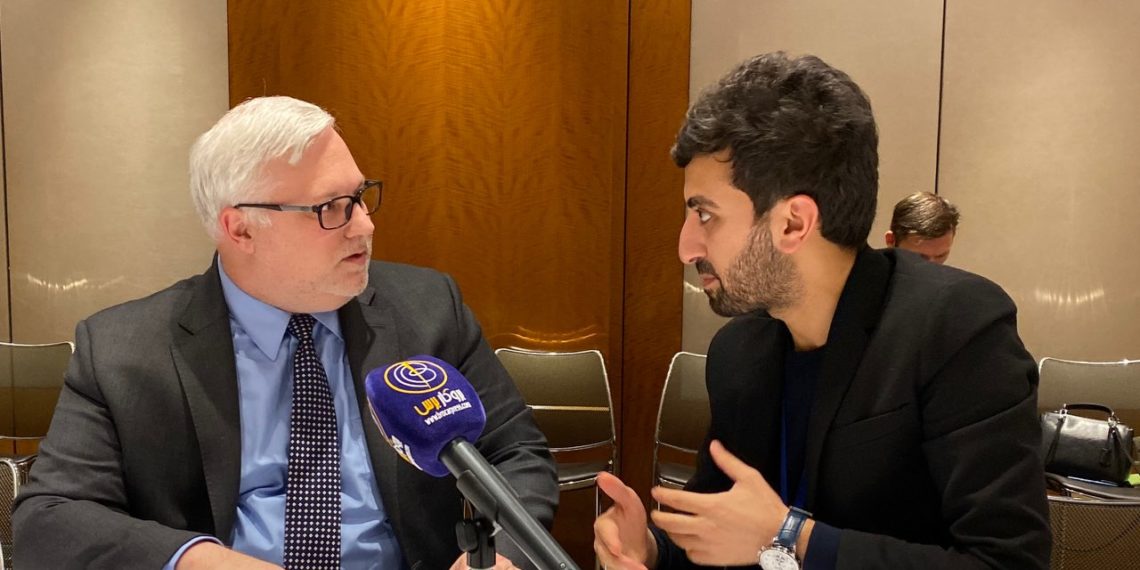 On Tuesday evening, the US State Department’s Special Envoy for Syria, Joel Rayburn, told Brocar Press during a closed meeting with a number of journalists in Geneva that the United States’s aims in Syria have three aspects: First, the United States wants to defeat the Islamic State (ISIS) and prevent it from appearing again; second, it wants all Iranian forces to withdraw, as well as the militias that Iran backs in Syria; third, the United States wants to reach a political settlement in accordance with UN Resolution 2254.

Rayburn added, in response to a question from Brocar Press, that the United States sanctioned Turkey because it had occupied a portion of Syria, and then when the shooting stopped, the United States had changed its position. He said that, “our military and political resources can change according to the dynamics on the ground in Syria.”

Rayburn responded to a question about the possibility of a military clash in the US-controlled areas—in a reference to the oil wells—by saying, “America’s remaining military force in Syria, whether in the oil areas or in al-Tanf, have specific objectives, as noted by the US defense minister when he spoke clearly about their operations. With regards to the use of military force, the minister said that American forces in the area had the right to defend themselves, as well as to prevent any other force from entering these areas. America has used force in the past, which occurred in Deir ez-Zor and al-Tanf.” He added that, “the military command had given them the authority to use military force.”

Brocar Press’s delegate asked the envoy what were the intersections and differences between the United States with both Turkey and Russia in Syria, and why had we not seen effectiveness in Syria from the Small Group compared with the Astana tripartite (Turkey, Russia and Iran)?

The envoy said that with regards to the differences between Russia, Turkey and America, there were books written about the differences, and that it was a complicated matter.

Regarding the role of the Small Group and the Astana alliance, the latter (Russia, Turkey and Iran) were “speaking openly, while the Small Group was not speaking and was acting silently.”

He added that the Small Group had an important role in the political process, as it included three permanent Security Council members, European countries, and three countries from the Arab League, as well as four countries from the NATO alliance. It was clear that the Small Group had major international influence, militarily, politically and economically, and was coordinating its policies and platforms, and that this was a powerful thing that affected everyone and set parameters for everything.

With regards to the Small Group’s influence, the envoy said that it had a major role in pressuring the Assad regime, and that it had prevented the regime from returning to the Arab League, which isolated it from Arabs and the world. They even shape US policy, so we coordinate with them. The Small Group has an important role in persuading the international community that the solution in Syria cannot be anything other than political.

The Astana group had major problems because the situation in Idleb was difficult, and the group was always in a risky situation, and a clash could occur in the group itself on the ground. But at the same time, “We’re happy that Turkey and Russia are playing an important role in overcoming the difficulties of the constitutional committee.”

The American envoy said in a meeting with journalists that the United States believed that the, “constitutional committee could change the course of the political track in Syria from a military solution to a peaceful solution to the conflict.”

Rayburn said that Security Council Resolution 2254 was the right path to reach a political settlement for the American administration.