On a recent visit to the frontlines in Idleb, President Bashar al-Assad has spoken out against the recent Turkish aggression and called out Erdogan reports Al-Araby al-Jadeed. 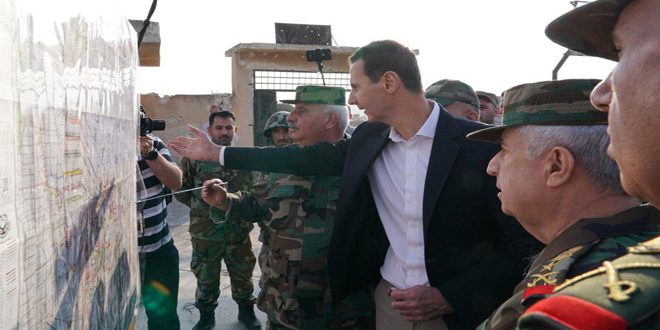 Syrian President Bashar al-Assad slammed Turkey’s leader Recep Tayyip Erdogan as a “thief” on Tuesday as he visited regime troops on the front line with opposition fighters in Idlib for the first time.

“President Assad meets members of the Syrian army on the front line in the town of Hbeit in the Idlib countryside,” the president’s office said on its social media networks.

The media quoted Assad as calling Erdogan a “thief who robbed factories, wheat and fuel and is today stealing territory” – apparently referring to Turkey’s invasion this month into northeastern Syria to push out Syrian Kurdish fighters.

His comments came as Syrian troops continued to deploy in parts of the north where they are supporting Kurdish forces to contain the Turkish invasion, according to state news agency SANA.

After turning the tide of the war, Assad’s forces now control around 60 per cent of the country  and the president has repeatedly vowed to return all of it to his control, including Idlib.

The Idlib region of some three million people has been protected by a Russian-brokered ceasefire deal since August, but skirmishes persist on the ground.

Assad also said Tuesday that defeating extremist groups in Idlib is the key to ending the country’s eight-year-old civil war.

“The battle of Idlib is the basis for resolving chaos and terrorism in all other areas of Syria,” he said while visiting troops on the frontline.

Russia-backed regime fighters have for weeks been chipping away at the edges of the province bordering Turkey that is the last opposition stronghold outside of Assad’s control.

Moscow is a key ally of the Syrian regime in the country’s civil war, and despite an Idlib ceasefire deal reached on 31 August, the province has continued to be targeted by Russian air attacks.

In late August, clashes between anti-regime fighters and regime forces left more than 50 dead on both sides, when rebel fighters attacked loyalist positions in the south.

Last month, Russia and China vetoed a UN Security Council resolution backed by 12 of the 15 member states that called for a ceasefire in Idlib province.

It was Russia’s 13th veto of a UN resolution since the Syrian conflict erupted in 2011, highlighting the Security Council’s impasse over the issue.

The air and land campaign has left more than 1,000 civilians dead and forced half a million to flee their homes, according to the United Nations.

Under the pretext of attacking terrorists, pro-government forces have targeted schools, hospitals and other residential areas in Idlib. According to the UN at least 51 health facilities have been damaged or destroyed in the past five months.

Both Damascus and Moscow say they are targeting extremist groups including Hayat Tahrir al-Sham, not civilians.

In a July letter to the UN, the Syrian government claimed that health facilities in the Idlib province had been rendered “out of commission since being taken over by terrorist groups” and therefore could not be considered “civilian objects.”

Hayat Tahrir al-Sham – a group led by Syria’s former Al-Qaeda affiliate – extended its administrative control over the whole of Idlib in January, but other rebel factions remain present.

The Syrian war has killed more than 370,000 people and displaced millions since it erupted in 2011 with the brutal repression of anti-government protests.