A recently released document has shown a link between the recent Turkish attack and groups funded and armed by the US writes SANA. 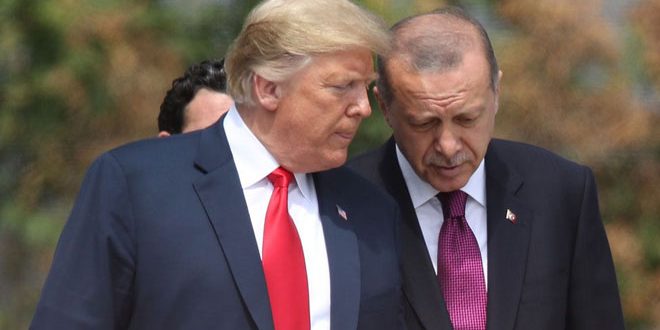 A new document confirms the collusion between the United States and the Turkish regime regarding the recent offensive on Syrian territory.

Not only did Washington give the green light to the offensive, but also placed its mercenaries and terrorists, whose crimes, for many years were backed and covered by it, at the disposal of Turkey.

The Turkish “Sita” research center unveiled, in a document, that most of the terrorist organizations united under the umbrella of Turkish aggression, were backed and funded by Washington and committed crimes under its directives.

The document, released recently by the independent “The Grayzone” news website, showed that 21 terrorist groups, which joined Erdogan’s mercenaries, were backed by the US, either directly through the Pentagon, or through the CIA and the operating room affiliated to it in Turkey.

According to the document, most of the terrorist organizations, circulated by Washington under the name of “moderate opposition” and armed and trained under the administration of former US President Barack Obama, moved to complete their crimes under the leadership of Erdogan through the current aggression on Syrian territory.

The document clarified that the US hypocrisy and double standards policy, according to Washington’s existing interests, appeared in the statements of US politicians and officials who condemned the Turkish aggression and the heinous crimes committed by Erdogan’s mercenaries, ignoring the fact that it was they themselves who created these mercenaries and backed them whether at the UN Security Council or at the United Nations, which they continued to do for more than eight years.

It mentioned that some US officials, who are now harshly criticizing the terrorists, had personally met with them.

The document recalled the visit of former US Secretary of State Hillary Clinton to Istanbul in 2012 to rally support for terrorist organizations, pointing out that these organizations would not have been existed without Washington’s support and the spending of billions of dollars over many years to achieve its own agendas.

The document touched upon the so-called “White Helmets”, which became a mercenary under the Turkish regime’s control, referring  to the crimes committed by its members against innocent civilians under the cover the United States and its allies in international forums.

The “White Helmets” organization was established in Turkey in 2013 with British, US and western funding; the scope of the organization’s work only in the places with terrorist organizations present has raised many questions.