Another mass grave has been uncovered in Raqqa city, this one at a school containing thirteen bodies writes Zaman Al Wasl. 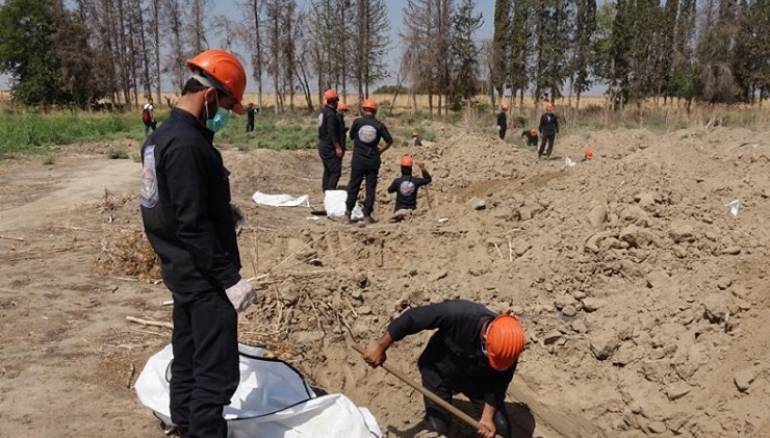 On Tuesday, a mass grave was exhumed at a school in Raqqa city, the First Response Team of Raqqa Local Council said.

The head of the team, Yaser al-Khamis, said thirteen bodies were recovered from a school in the Badu (Bedouin) neighborhood in Raqqa city, saying the grave is the 16th mass grave to be exhumed since the fall of the Islamic State (ISIS) in October 2017.

Since the defeat of the ISIS in Raqqa, forensic teams began to lift bodies believed to have been buried there during the four-month campaign to liberate the city.

So far, 5,000 bodies have been exhumed from mass graves in the areas of al-Rasheed Stadium, the zoo, the Bedouin neighborhood, and the ancient mosque.

In November 2018, about 800 bodies were exhumed from the Panorama mass grave, but estimates suggest the number of bodies buried there at around 1,500.

Raqqa based activists said the victims in the mass graves were not only killed by ISIS, but also by the US-led Coalition airstrikes and the YPG-led Syrian Democratic Forces (SDF).

The regime forces also found a mass graves near Tabqa air base, containing the bodies of 60 troops killed by ISIS in 2014. The bodies were moved to Aleppo military hospital.

The SDF has been the main partner of the US-led coalition against ISIS in Syria, helping drive the jihadists out of swathes of northern and eastern Syria.