Saer Salama, a National Defense fighter, was in Lattakia to recruit fighters, when he was arrested and tortured to death in a regime prison reports Baladi News. 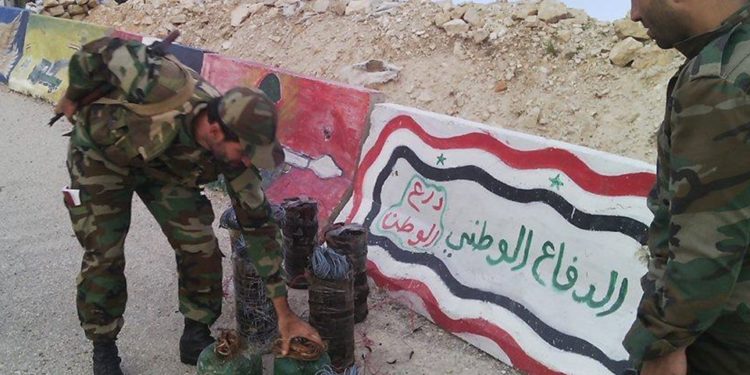 The death of a fighter in the Syrian regime’s National Defense militia has ignited a wave of anger and discontent among loyalists, while a member of parliament has made accusations against the Interior Minister and the torture methods used in prisons. Those who are “crying for the shabih” were not moved when tens of thousands of images of those killed under torture in regime prisons were leaked from regime files.

The wave of anger was caused by the death of Saer Salama, a National Defense fighter who was known locally as a “shabiha” after he was beaten by police in prison for objecting to his detention according to local loyalists pages and sites.

Salama had returned to Lattakia from the northern Hama countryside fronts to recruit more young men and bring them into the battle. But the regime’s Criminal Security arrested the recruits because there were wanted people among them. Salama was among those arrested.

In prison, the young men fought with the police, who beat Salama and then transferred him to the hospital where he died from his wounds on Saturday.

Parliament member Nabil Saleh said on his Facebook page to Interior Minister Major General Mohamed Rahmoun that “interrogation methods have developed and you no longer have to whip the feet of suspects to secure information,” without talking about the other methods.

No loyalist political or military entity has condemned the systematic arrests and forcible disappearances that the regime has pursued since the revolution broke out in 2011.

There are no final statistics about the number of people who have been arrested and put in regime prisons, but the Syrian Network for Human Rights has documented 98,279 cases of forcible disappearances since 2011 up until last month, as well as the deaths of 14,000 prisoners under torture up until the end of 2018.

The regime has documented the deaths of prisoners in the civil registries and has informed their families in some cases that their children died of diseases, without hanging over their bodies or informing them of their fates.