Turkish backed factions have forced people in Afrin to attend a march in support of the Turkish president, or face a fine or possible expulsion reports Etihad Press. 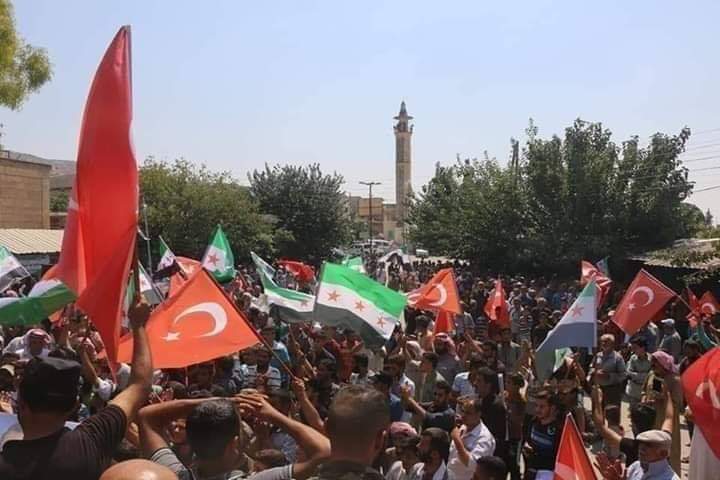 Turkish backed military factions in Afrin organised a march to show support for Ankara and Turkish President Recep Tayyip Erdogan, in response to the mass protests by people from Idleb at the Bab al-Hawa border crossing, who were denouncing the failure of the Turks, who are supposed to act as guarantors, to protect them from Russian and regime attacks on their cities and villages.

The factions took part in a pro-Turkish march in Jandrisah district on Saturday, with Kurdish activists from Afrin saying that the factions forced the area’s residents, as well as the displaced people living in the area, to participate in the march.

Members of the Amshat faction imposed a 500 dollar fine on those who refused to participate, including Osman Hajji, Ismail Ibesh Ali and Hassan Kilo from the village of al-Cana, as well as Ahmed Hassan Musako and Jamil Majid Khalil from the village of Khalil. The faction also threatened people who refused to participate in the march with expulsion from their homes and to settle IDPs from Idleb in their place.

On the other hand, members from the Levant Front (Jabhat Shamiyeh) assaulted a family in who had been displaced from eastern Ghouta, severely beating the head of the family, after he refused to evacuate his house, which he had contracted to rent.