President Bashar al-Assad spoke with the European Member of Parliament, Terry Mariani, about the war against terrorism and Europe's policies towards Syria writes SANA. 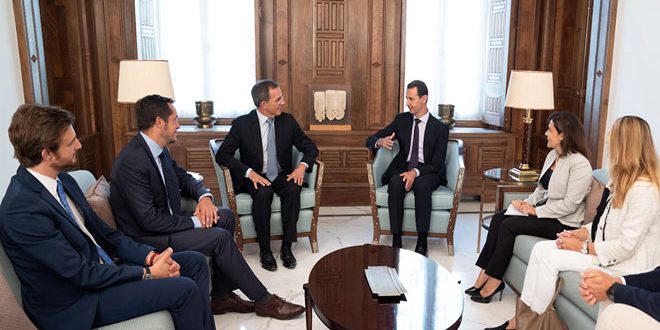 On Thursday, President Bashar al-Assad received a delegation from the French National Rally, headed by Thierry Mariani, who is a member of the European Parliament.

The meeting discussed the situation in Syria and the developments of the war on terrorism, while the French delegation posed a number of inquiries and ideas that were answered by Assad, particularly on the continuation of war against terrorism until it is completely eradicated from all the Syrian territories and the recent victories of the Syrian Arab Army in the countryside of Hama and Idleb, the Turkish interference that is supporting the terrorist groups spread in Idleb, the foreign terrorists fighting in Syria and the US Administration policy that is seeking to destabilize the situation in Syria and the region.

An in-depth dialogue was held on several issues of common interest, particularly the policies adopted by Europe against states in the region, extremism and terrorism, as well as the dependence of some European states on the US and the harm inflicted on the European people due to these policies, future of Europe and the nature of its relations with other states.