Hundreds of Syrians who were displaced to Lebanon have returned to their homeland, following coordination between the Syrian and Lebanese government writes SANA. 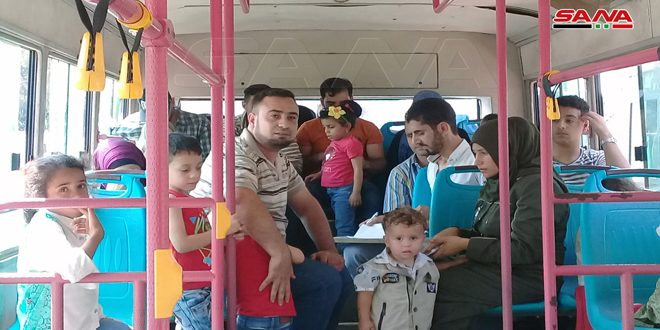 On Thursday, hundreds of the displaced Syrians arrived at the al-Dabbousyia, al-Zamrani and Jdeidet Yabous crossings, coming from Lebanon, following the joint efforts exerted by the Syrian government in cooperation with the Lebanese side for the return of all the displaced to the homeland.

SANA’s correspondents at the crossings said that tens of the Syrian buses entered from the Lebanese territories with hundreds of Syrian citizens onboard who had been earlier displaced from their homes in Homs, Damascus, Hama and Aleppo by terrorist organizations.

The returnees expressed thanks for the Syrian Arab Army for its heroism and sacrifices which led to the liberation of their villages and towns from terrorism and allowed them to return to their homeland after years of the displacement, indicating that all the main services have returned to their areas.

They added that there are large numbers of displaced Syrians who want to return to their villages and towns after security and stability was restored to the homeland and they are waiting to return as soon as possible.

Last July, three batches of the displaced Syrians returned from Lebanon via the Jdeidet Yabous, al-Dabbousyia and al-Zamrani crossings, to their villages and towns after the Syrian Arab Army restored security and stability to them.