As the Damascus International Fair gets underway, there is a notable decline in the number of participants when compared with last year writes Brocar Press. 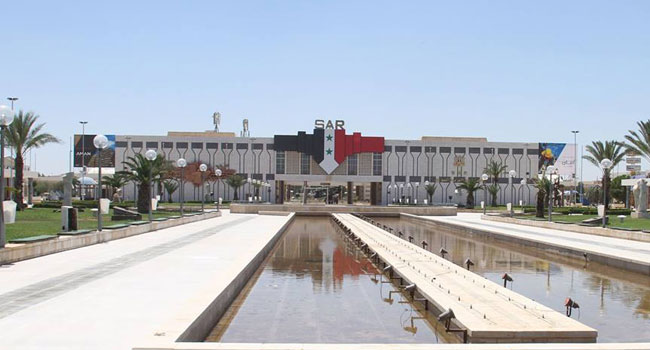 Regime media and Russian media are preoccupied with covering the preparations for the start of the 61st Damascus International Fair, which is running from Aug. 28 to Sept. 6, 2019, while ignoring the major decline compared to the previous fair, in terms of the number of participants and the area reserved for them.

Reports issued about the fair say there are 38 states taking part in the activities this year, which means that there are 10 fewer than last year, which saw 48 countries participate.

The administration of the exhibition was silent about announcing the delegations taking part in the fair while the regime news agency SANA said that delegations of businessmen from Iraq, Oman, the United Arab Emirates, Lebanon and Iran could participate.

Media reports also indicated that the Syrian (regime) companies taking part in the fair comprised more than 70 percent of the reserved space this year, amounting to about 100,000 square meters.

As the United States renews its threats to impose sanctions on participants of the fair, Russia Today quoted a source from the Damascus International Fair as saying that a high-level Emirati delegation including 40 businessmen would come to Damascus to take part in the 61st session of the fair.

The Emirati delegation, according to the source, included a number of prominent Emirati names in the fields of finance and business and heads of real estate development firms and commercial groups as well as general managers, members of chambers of commerce in Abu Dhabi, Dubai, Fujairah, Ras al-Khaimah, Ajman, Sharjah and Umm al-Quwain.

Iranian officials said that about 100 Iranian companies would take part in the fair with a total space of 1,200 square meters, with dozens of companies in the fields of heavy industry, cars and others. Oman, Armenia, Russia, China, India and Crimea would also participate.

On Aug. 23, 2019, the United States threatened companies and figures that would participate in the Damascus International Fair with economic sanctions, calling for them to stop supporting the Syrian regime.

The Russian Foreign Minister responded by saying that. “American attempts to derail the Damascus International Fair and harm Syria are part of the attempts to impede the efforts of the Syrian leadership to rebuild the country.”

The ministry said in a statement: “We consider the continuing US attempts to block the Syrian leadership’s efforts to rebuild the country after the crisis to be harmful to Syria’s unity, sovereignty, and regional security, and to be in direct contradiction of the text and spirit of the international community’s resolutions with regards to Syria, including Security Council Resolution 2254.”

The page for the United States embassy in Damascus previously said that the “United States does not in any way encourage commercial companies or individuals to take part in the Damascus International Fair on Aug. 28.”

The embassy said: “We’ve received reports that some regional businessmen or chambers of commerce plan to participate in the Damascus International Fair. We reiterate our warning that anyone doing business with Assad regime or its associates is exposing themselves to the possibility of US sanctions.”

The embassy requested information about any, “companies or individuals planning to take part in the trade fair in Damascus, to submit this information to the American authorities.”