Displaced people, fleeing the violence in northern Hama and southern Idleb, have complained about the extortionate fees they are being charged to secure shelter writes Iqtissad. 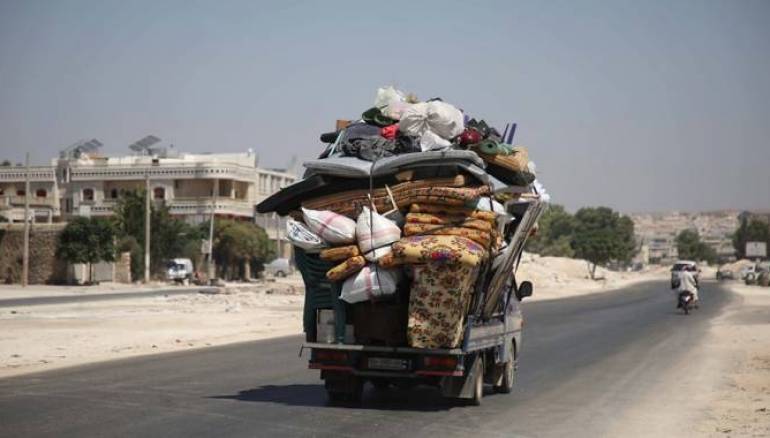 People of northern Idleb province who fled the regime’s offensive to the border city of Afrin have been facing restrictions imposed by the local authorities, according to displaced people.

Mohamed Nadeem, one of the displaced, who recently arrived in Afrin, said the Trinda military checkpoint, which includes elements of the Turkish army, imposes strict security restrictions on the entry of vehicles transporting IDPs from the southern countryside of Idleb, coming through Ghazawiya-Darat Azza crossing reserved for commercial purposes only.

“The checkpoint has taken new measures regarding the movement of IDPs to prevent all vehicles without license plates issued by the local authorities in the area from crossing, except for vehicles carrying a military mission document certified by one of the opposition factions operating in the Euphrates Shield and Olive Branch areas.”

Since the beginning of the northwest Syria offensive in late April, regime airstrikes have killed more than 900 civilians and displaced more than 600,000.

Displaced people fleeing the advance of regime and Russian forces in the southern countryside of Idleb, are suffering not only from their difficult journey, but also from the high transportation fees, after months of economic hardship due to the cessation of their work and professional activities.

According to Ahmad al-Khalil, a displaced person and head of a family of five from al-Mentar village, and who arrived about a week ago with his family in Afrin area, transportation fees currently range between 30,000 to 35,000 Syrian pounds.

“It is different for transport vehicles dedicated to the shipment of luggage and furniture; as the owners demand higher amounts ranging from 45,000 to 70,000 pounds, in exchange for the transportation of furniture from Idleb to Afrin.”

Khalil warned that the majority of IDP families had to relocate part of their furniture with them because of their inability to purchase anything new, in addition to their fear of looting by the regime forces after taking control of the cities and towns, or fear of being damaged and destroyed by military operations.

Ahmed al-Dhahir, who was displaced from the village of Kafr Ayn, found it very difficult to secure a residential house for his family of four in the city of Afrin. It takes a long time to search for an apartment, not to mention a monthly rent of no less than 20,000 pounds and a minimum contract of three months. As well as the additional costs of renting a house, electricity costs 1,700 pounds per ampere a week, and 1,000 pounds for one meter of water every three days.

Dhahir said that he was forced to go to rural villages, where his family are now staying with some of his relatives, pointing out that this is a temporary residence until his economic conditions improve.