An explosion at offices belonging to the Qaterji Group in Aleppo killed a number of people and caused damage to the surrounding area reports Al-Modon. 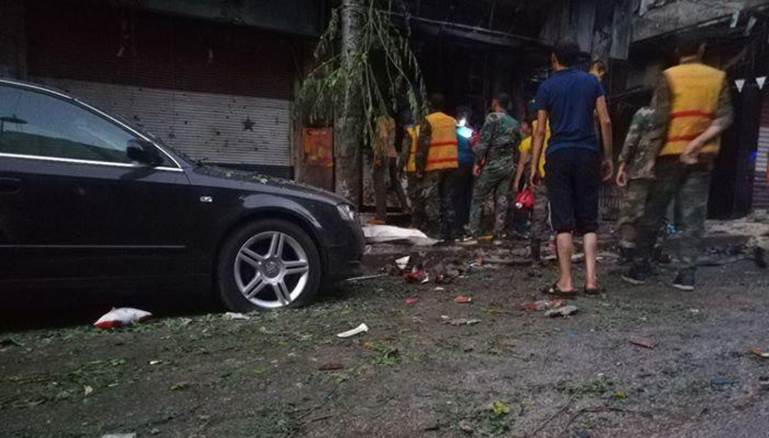 Pro-regime media outlets said that the armed opposition used rockets and artillery to strike the commercial district in al-Jamelaiah in central Aleppo, killing more than seven people and setting fires in the areas that were struck.

An opposition military source speaking to Al-Modon denied that the opposition had struck the al-Jamelaiah district and the heart of the city with heavy weapons. According to the source, a bombardment by the opposition was concentrated in the western Aleppo countryside, striking militia positions in al-Rashideen, the environs of the Military Academy, and the Iranian military base and Iranian observation point. Opposition bombardments also focused, according to the source, on Republican Guard positions in the Zahraa Association area and the northern suburbs—but it had not struck civilians in residential areas as the regime claimed.

The supposed bombardment on the al-Jamelaiah district seemed unclear in the one video taken from a relative distance from the site. The targeted location were the offices on the first floor of a commercial building, including apartments that were not damage, which contradicts the theory that these were rocket strikes.

Al-Modon’s sources said that regime militias had prevented civilians from getting near the site of the blast and that they had encircled it entirely, and that the wounded were taken to a nearby hospital.

The sources said that it was likely the blast was a measure by businessmen loyal to Russian militias, with the attack part of the Iranian-Russian competition in Aleppo through proxies who are manufacturers and traders loyal to each side.

The Qaterji Group controls a large part of commercial and industrial work in Aleppo, with its projects expanding greatly over the last two years, given its proximity with the Iranian regime’s militias. Qaterji has naturally expanded at the expense of traditional businessmen and manufacturers in Aleppo, who see his group as a threat to their interests. For the most part they are loyal to the chamber of commerce headed by Fares al-Shihabi, who is close to Russian militias.