During a dialogue session with young members of the Baath party, the president highlighted the need for everyone to develop writes Al Watan. 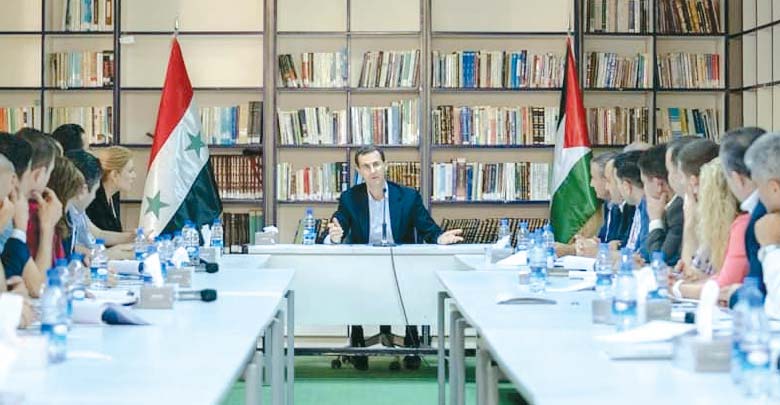 President Bashar al-Assad said that the country is a home to all and that what it is experiencing today was a case of drowning in terminology, which aimed to deliver a moral defeat to us, because our society is built on diversity. He said the matter could be summarized as the West wanting to turn the country’s diversity into dissonance by targeting Syrian society with terms that have no place in the public discourse.

Assad delivered his speech while participating in a three day dialogue session being carried out by the youth office in the central command of the Arab Socialist Baath Party for three days.

The Secretary-General of the Baath Party said during the session that we cannot triumph if we do not have discussions and that no official is able to develop without dialogue.

Assad said that: “Every time people’s participation is increased, we reached a more comprehensive consensus, and the country develops systematically. This is accomplished through dialogue and by strengthening decentralization in accordance with specific mechanisms and regulations, because in many cases the mechanisms are the reason for the success or failure of any institution.”

Assad stressed that the party is responsible for confronting the terminology that targets our society and which are clarified with dialogue and participation, without neglecting the importance of reviewing terms to help us unite our ideas, such as “secularism” and “civil” and so on, as there is a direct connection between terms and our daily lives.

The dialogue session came at the close of a three day event held by the central youth office at the central command of the Baath Party, during which a number of central issues were put forward by the interlocutors at the beginning of each session, with participants in the session engaging in dialogue and sharing ideas to try and find common denominators and summarize the results to benefit Baath work.

Al-Watan learned from informed sources that the session was set up for about 45 Baath Party cadres from the youngest youth segment, represented by popular organizations and professional organizations and members of branch commands.

Sources told Al-Watan that the dialogue session with Assad lasted about two and a quarter hours and referenced everything connected to strengthening the culture of dialogue. The role of these cadres is to transmit these ideas and develop experience through workshops, to strengthen these joint concepts on the national level with regards to the terms confronting Syrians, or the national political principles, which must be confirmed.

The sources said that these dialogue sessions would expand throughout the provinces, based on their results, with regards to terminology and national issues.

The sources told Al-Watan that Assad’s visit came as part of a push to develop this organization, which was experiencing a “classic and traditional” stage, and turn it into a modern organization and prepare party cadres for a new type and to depart from the “typical” framework and improve the image of the Baath Party to the Republic and society.

The sources said that these dialogue sessions were the first steps in a long process of work to produce nearly-new staff that was able to accompany the coming stage through education, qualification, and the ability to manage dialogue.