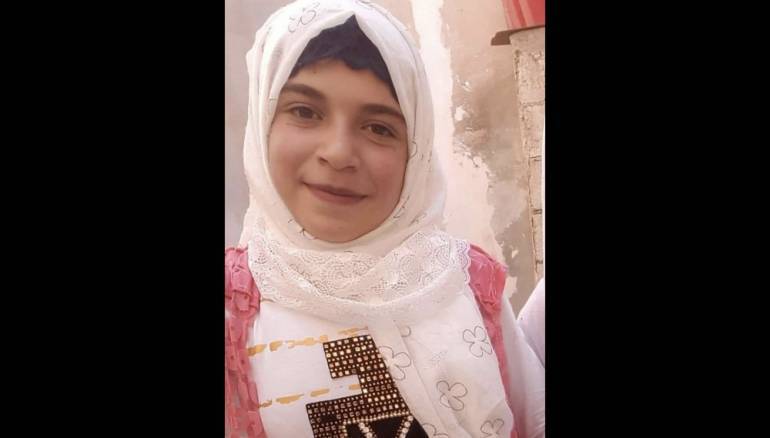 Thirteen-year-old Siba al-Daddo died of a heart attack as a result of regime bombing the rebel-held area in northern Aleppo province where she lives, local activists said Monday.

The heavy aerial and ground bombardment on the town of al-Eys in the southern countryside of Aleppo was so brutal that it squeezed the heart of a Syrian children, activists said.

Daddo was a displaced with her seven-member family from of Khan Sheikhoun, the town that was hit by chemical weapons in April 2018.

On Sunday, the regime media justified the heavy offensive against rebel-held areas in Aleppo by citing the death of six civilians in a suspected Hay’at Tahrir al-Sham rocket attack on Aleppo city, which the regime retook full control of at the end of 2016.

On Sunday, the pro-regime newspaper Al-Watan said on its Telegram messaging app that the, “[regime] army has been responding to terrorist attacks… with salvos of rockets”.

Fighters of Syria’s former al-Qaeda affiliate Hay’at Tahrir al-Sham are deployed in the neighbouring province of Idleb and nearby regions including the western Aleppo countryside.

Russian and regime aircraft have ramped up strikes on Idleb and parts of Hama and Aleppo since the end of April, killing nearly 600 civilians.

Idleb and its surrounding areas are supposed to be protected from a massive regime offensive by a September 2018 deal between Russia and rebel backer Turkey.

More than 600 civilians have been killed in northwest Syria since the end of April, the Syrian Observatory for Human Rights and activists say.