Syria and Russia discussed their deep rooted friendship, the latest developments in the war against terrorism and the intra-Syrian national dialogue writes SANA. 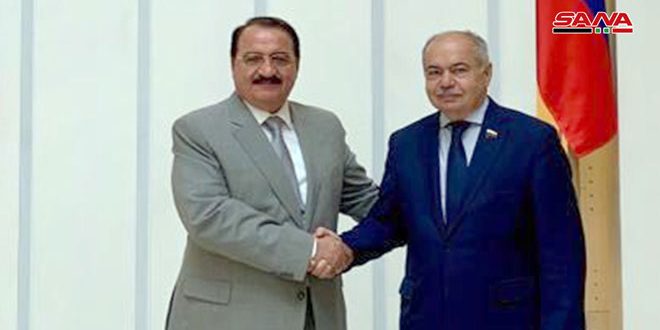 The Deputy Speaker of the Russian Federation Council, Iliyas Umakhanov, discussed with Syria’s Ambassador to Russia, Dr. Ryiad Hadad, the situations in Syria and the latest developments in the war against terrorism.

During the meeting, which was held at headquarters of the Russian Federation Council, both sides underlined the necessity of continuing to combat terrorism in Syria until it is completely eradicated.

They affirmed that solving the crisis will only be achieved by the Syrians themselves according to the outcomes of the Sochi conference for the intra-Syrian national dialogue and Astana agreements and UN Security Council resolution no. 2254.

Umakhanov and Hadad hailed the deep-rooted relations of friendship and cooperation between Syria and Russia in all domains including the parliamentary one.