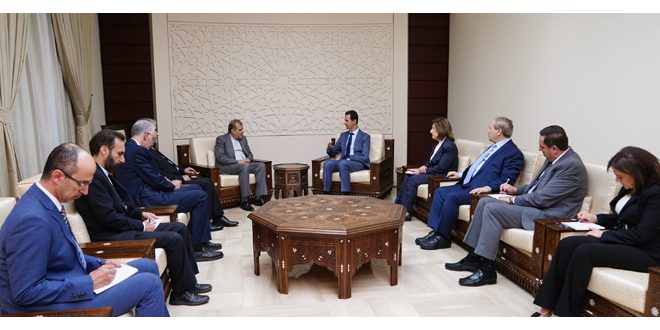 Assad was briefed by Khaji on the developments of the Iranian nuclear agreement after Washington backed out of it, and the recent US escalatory positions that seeks to destabilize the region and increase tensions. President Assad affirmed Syria’s support for Iran and its leadership in defending their people’s rights against all threats and acts that violate the basis of international law.

During the meeting, talks touched on the war on terrorism in Syria and the responses to the attacks carried out by terrorist organizations in Idleb against civilians in neighboring areas, as well as developments on the political track, the upcoming round of Astana talks and the situation in regional and international arenas.

Talks also discussed Syrian-Iranian relations, with Khaji asserting the strength of the strategic relations between the two countries, affirming Iran’s determination to continue bolstering them in all fields to serve the interests of both sides, adding that the Iranian leadership and people always have and always will support Syria until it liberates all its territory and rebuilds what has been destroyed by war.