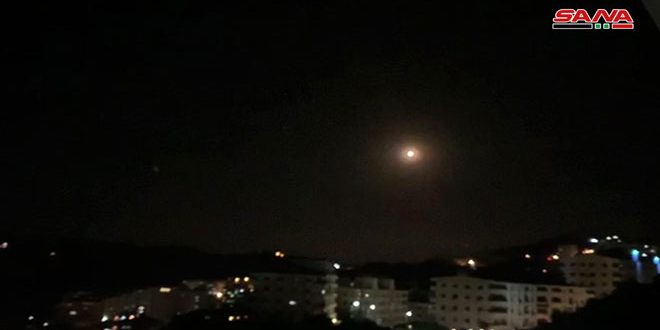 The air defenses of the Syrian Arab Army after midnight intercepted hostile missiles fired by Israeli warplanes towards some military positions in Homs and the surroundings of Damascus as a number of civilians, including a child, were martyred in the aggression and others were injured in Sahnaya town in Damascus’ southern countryside.

A military source said in a statement to SANA: “Our air defenses intercepted hostile missiles fired by Israeli warplanes from Lebanese airspace towards some of our military positions in Homs and the surroundings of Damascus.”

SANA’s reporter said that four civilians, including a baby, were martyred and 21 others, including children, were injured in Sahnaya town in the Damascus Countryside, adding that the injured were rushed to the hospitals where they received the required treatment.

Earlier, the reporter said that due to the pressure that resulted from the explosions, which occurred in the sky over Damascus, material damage was inflicted on a number of civilians’ houses in Sahnaya town as the windows were shattered, injuring a number of people.

On Jun. 11, 2019, the army’s air defenses intercepted and downed a number of Israeli missiles fired at Tel al-Hara in the southern region.

In recent years, the Israeli enemy has intervened many times to support its collapsing terrorist tools, with a multitude of field and intelligence reports affirming the strong link between these terrorist organizations and the Israeli enemy and their exposed coordination.