The decision by the Yazidi Spiritual Council to not accept children who were born to fathers of ISIS has forced some women to make a difficult decision to either not return home or give up their children reports Etihad Press. 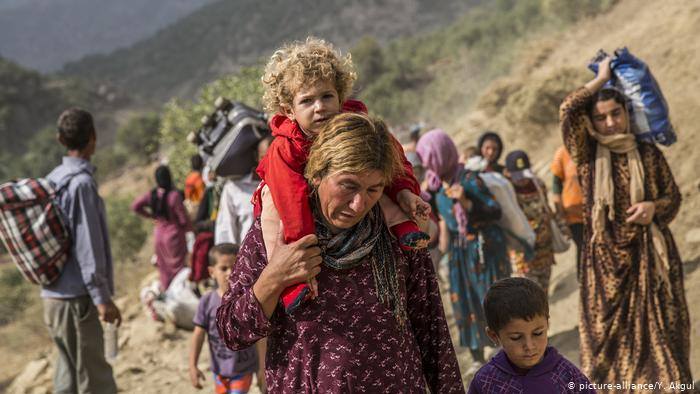 The Yazidi Spiritual Council has decided not to accept children born of terrorist fathers from the Islamic State (ISIS) to Yazidi mothers in captivity.

The decision increases the plight of these mothers and their children, who had no sooner ended their captivity when they found themselves placed before difficult decisions—either refuse to return to their homes in order to keep their children, or return to their families but give up their children, because the Yazidi community had rejected children born to fathers who carried out massacres of Yazidis. Additionally, the children according to Iraqi law follow the religion of the father, Islam, given that ISIS members are Muslim, and that the child would not follow the mother’s Yazidi religion. There are 350 were children born to Yazidi mothers from ISIS fathers.

A Yazidi activist said that, “it is impossible to allow a child to live in a community where dozens of members of the community were killed at the father’s hands.” There are 16 of these children, who will be transferred to an orphanage in the city of Dohuk in the west of the Kurdistan Region of Iraq.

The Yazidi activist’s statement to Swedish media sparked the ire of human rights activists, pushing some Kurdish and Swedish activists to work on a project to transfer these children to Sweden and Europe.

The initiative was started by a Kurdish activist in Sweden named Samia, who said that European countries had expressed their readiness to take in these children. She said that work was currently underway on the matter of the 16 children, but due to the sensitivity of the issue, the process is being kept secret.

After the Yazidi captives were freed from ISIS, controversy broke out in Yazidi circles regarding the position of those saved. The Yazidi High Spiritual Council decided to accept the survivors, even if they were raped, but rejected the children who were born of these rapes because the principle of religion state that a child must have two Yazidi parents.